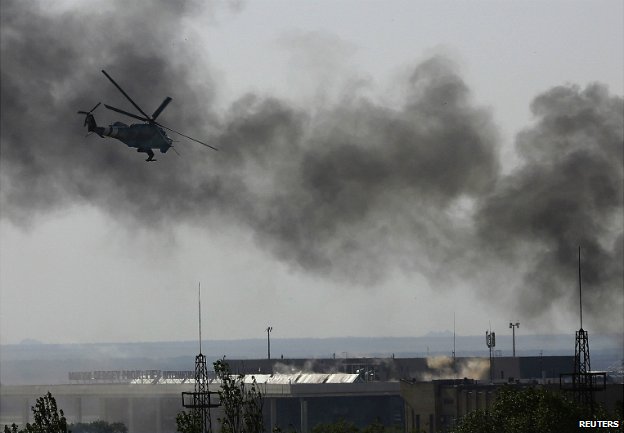 A stand-off between government forces and pro-Russia gunmen is continuing after Ukraine’s military sought to retake control of Donetsk airport.

A BBC reporter says Ukrainian soldiers resisted a counter attack by rebels and now hold some parts of the airport.

The fighting came as Petro Poroshenko, Ukraine’s new president, said he wanted to talk to Russia to end the crisis.

Russia’s Foreign Minister Sergei Lavrov said Moscow was “open to dialogue” with Mr Poroshenko but insisted that military action against separatists must end. 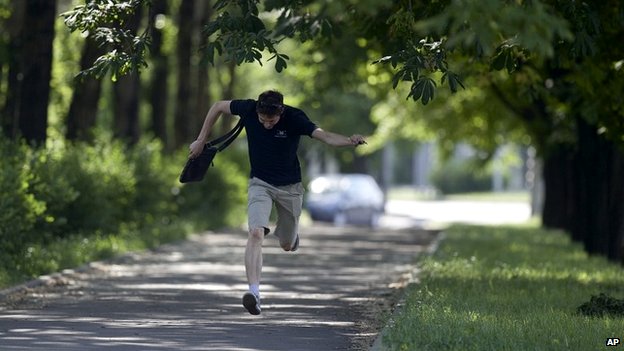 Locals ran for cover as the fighting intensified. The mayor of Donetsk said there were “civilian casulties”

But Mr Poroshenko vowed to continue Kiev’s “anti-terrorist operation” against pro-Russia gunmen in the east of the country.

“Their goal is to turn Donbass [east Ukraine] into Somalia. I will not let anyone do this to our state and I hope that Russia will support my approach,” he said.

He said he hoped to meet Russian leaders early next month, after a trip to Poland where he will meet the US president and EU leaders. 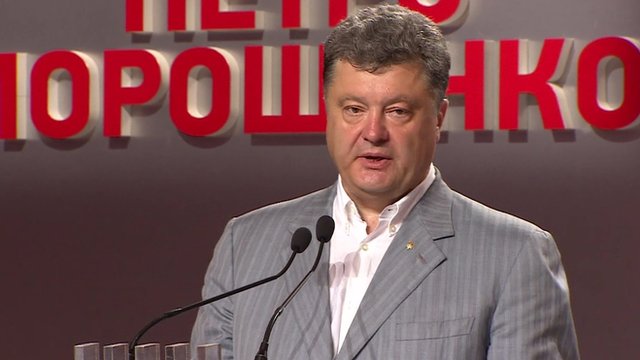 Petro Poroshenko: “We will fight for the trust of the people of Donbas”

Earlier, Mr Poroshenko, a 48-year-old billionaire and former foreign minister, was formally declared the winner of Sunday’s presidential election with 54% of the vote.

Former Prime Minister Yulia Tymoshenko was a distant second on 13%.

The mission from the Organisation for Security and Co-operation in Europe (OSCE) also said it gave the new president “legitimacy” to open a dialogue with separatists in the east. 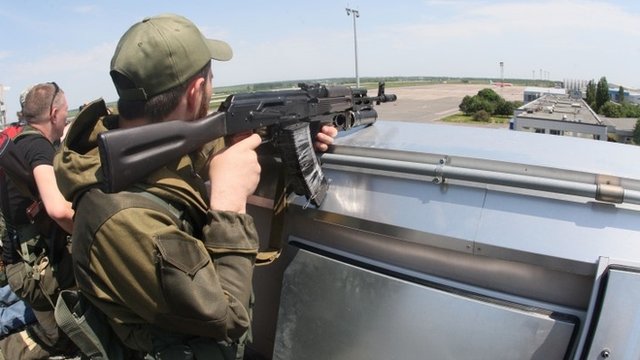 Monday’s clashes started after separatist militants stormed the Sergei Prokofiev Donetsk airport in the early hours of the morning.

Correspondents said the operation may be the biggest launched by the authorities in Kiev since the start of the unrest in the east.

The BBC’s Mark Lowen in Donetsk says the fighting appeared to stop late on Monday evening, with Ukrainian government forces apparently in control of at least some of the areas inside the airport.

The mayor of Donetsk said there had been “civilian casualties” in the battles and told local residents to stay indoors – but there was no confirmation of any deaths.

The attempt by armed separatists to seize the airport may have been intended to prevent Mr Poroshenko from travelling there after he said his first trip in office would be to visit the restive east. 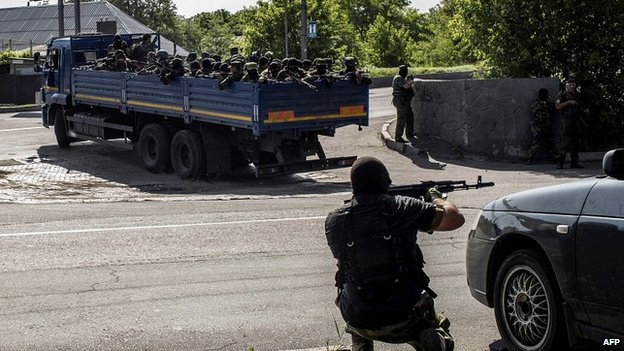 Ukraine’s interim government is engaged in an offensive in the east to quash the uprising that has left scores dead.

Pro-Russian separatists severely disrupted voting there. No polling stations were open in Donetsk city or across the region.

Since then, Russia has annexed the Crimean peninsula in southern Ukraine and armed separatists in the eastern provinces of Luhansk and Donetsk have declared independence. 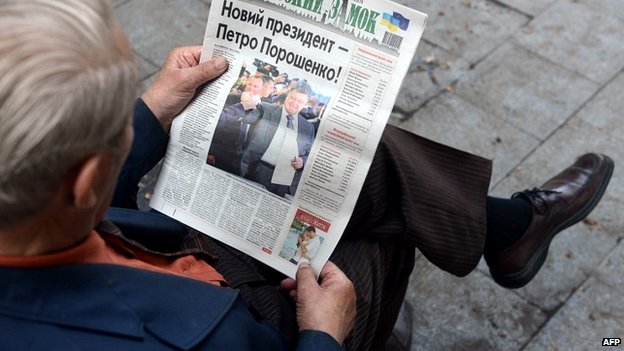 “Has Ukraine been reborn?” asks the Ukrainian edition of Komsomolskaya Pravda. It says the election “will have a special place in the history books”. But the paper notes that Crimeans did not vote and the voting in Donbass and Luhansk – formerly Ukraine’s “electoral core”, proceeded with “great difficulty”.

Claims in the Russian media that Ukraine is overrun by extremists and neo-Nazis are ridiculed by some social media commentators. The two right-wing candidates – Dmytro Yarosh and Oleh Tyahnybok – polled less than 2% in total.

A turning point, or business as usual?

Are you in Donetsk? Have you been affected by the suspension of flights? What is your reaction to Petro Poroshenko’s apparent victory? What next for the country? If you are happy to speak to the BBC you can email your experiences to haveyoursay@bbc.co.uk, using the subject line ‘Donetsk’.