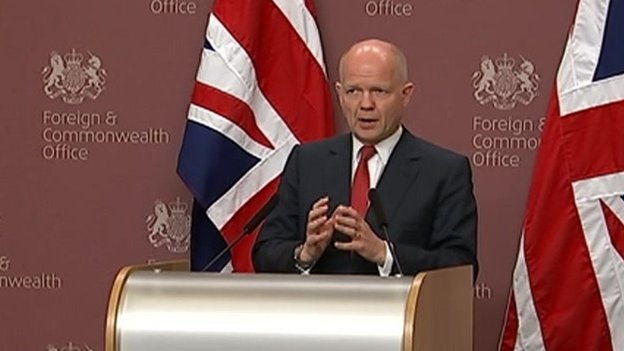 Presidential elections in Syria will be a “parody of democracy”, UK Foreign Secretary William Hague has said.

Mr Hague said Syria’s government had an “utter disregard” for life, and President Bashar al-Assad decision to call an election for 3 June “disgusted” the international community.

The foreign secretary also announced the Syrian opposition would have its diplomatic status in the UK upgraded.

The UK is continuing to push for President Assad to stand down, but he has sought a third seven-year term in the elections.

Mr Hague hosted a meeting of the The Friends of Syria group – made up of Egypt, France, Germany, Italy, Jordan, Qatar, Saudi Arabia, Turkey, the United Arab Emirates, the UK and the US – in London.

Afterwards, he said: “We are of course united in our disgust and anger at what’s happening in Syria and the ruthless utter disregard for human life.”

The group agreed a short communique criticising the decision to hold an election at a time when millions of people were displaced and the bloodshed was continuing.

Mr Hague called on the whole international community to “reject these illegitimate elections”, saying: “We’ve also agreed unanimously to take further steps to… do everything we can to hold the Assad regime accountable for the terror it is perpetrating.”

He promised the UK government would increase its humanitarian efforts, with £30m of extra funding, in particular aimed at getting to areas which the United Nations has not yet been able to help.

Friends of Syria was set up in 2012 in response to moves by Russia and China to block UN resolutions against the Assad government.

The meeting comes days after UN special envoy Lakhdar Brahimi stepped down over lack of progress in ending the crisis.