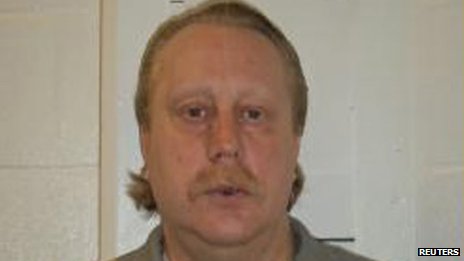 Bucklew’s condition would put him at risk of suffocating during a lethal injection, a doctor who examined him said

A US Supreme Court justice has delayed the execution of a Missouri man amid concerns a medical condition could complicate the lethal injection and cause undue suffering.

His lawyers say a congenital deformity in his throat would put him at risk of choking during a lethal injection.

The execution would be the first since a botched lethal injection last month.

A prisoner in Oklahoma, Clayton Lockett, died of a heart attack in April after the executioners reported trouble finding a vein in which to inject the lethal drugs and officials halted the execution. He reportedly writhed and moaned as the first drug of three lethal drugs, a sedative, apparently failed to take effect as intended.

Bucklew’s reprieve, however temporary, came after a day of legal wrangling that first saw a three-judge panel of the 8th Circuit Court of Appeals, a regional federal court, grant him a stay of execution, only to have that stay overturned hours later by the full court.

Then, with just two hours to go until the scheduled execution, Supreme Court Justice Samuel Alito, who handles emergency appeals for the 8th Circuit region, issued his own stay.

Bucklew could be put to death later on Wednesday if the Supreme Court considers his case and opts not to intervene.

He suffers from a condition called cavernous hemangioma, which causes malformation of the blood vessels and tumours in the throat and nose.

In an affidavit for his defence team, an anaesthesiologist and surgeon wrote last week that during an execution he would be “at great risk of choking and suffocating because of his partially obstructed airway”.

In 1996, Bucklew murdered a man he believed was romantically involved with his ex-girlfriend, then raped the woman during his escape from the scene of the murder. He was convicted of first-degree murder, kidnapping, burglary, forcible rape, and armed criminal action.

US states have had increasing trouble in recent years finding drugs to use in executions, amid an embargo from the European Union, where pharmaceutical manufacturers have refused to ship drugs to buyers in the US for use in lethal injection.

The shortage has led the states in some cases to turn to lesser-regulated compounding pharmacies.

Missouri executes inmates with a single, lethal dose of the drug pentobarbital.

Like other states, it keeps the source of the drug secret, in an effort to shield the provider from scrutiny and unfavourable publicity. News organisations and inmates have sued the states in an effort to force them to disclose the companies names. Their efforts have been rejected by the courts.