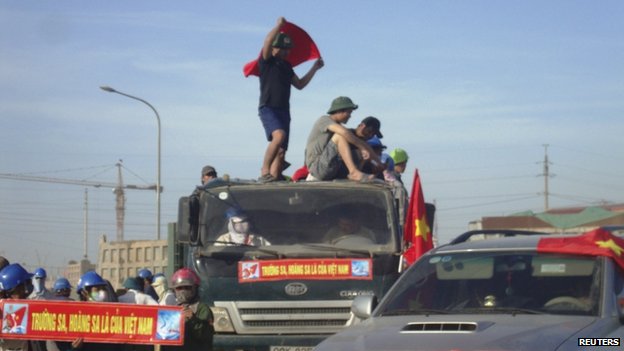 A Chinese worker has been killed and at least 90 other people injured as protesters attacked a steel mill in Vietnam, amid anti-China tensions over the South China Sea dispute.

The incident took place at a Taiwanese-owned mill in Ha Tinh province.

It came a day after protesters burnt several foreign-owned factories at an industrial park.

The demonstrations have been sparked by China’s movement of a drilling rig into waters also claimed by Vietnam.

Protesters appear to have targeted businesses with Chinese characters in their signs, even if they are from other countries such as Taiwan.

The Chinese embassy in Vietnam on Thursday urged Chinese nationals to take precautions, in the second such statement in as many days.

In a statement, it said Chinese businesses and workers had been targets of violence in at least seven cities or provinces across Vietnam. The embassy said it had asked Vietnamese authorities to ensure the safety of Chinese citizens.

A Chinese foreign ministry spokeswoman told a press briefing that the violence had “a direct link with the Vietnamese side’s indulgence and connivance in recent days with some domestic anti-China forces and lawbreakers”.

On Tuesday, at least 15 foreign-owned factories were set on fire at industrial parks in Binh Duong province, and hundreds more attacked. No casualties were reported. 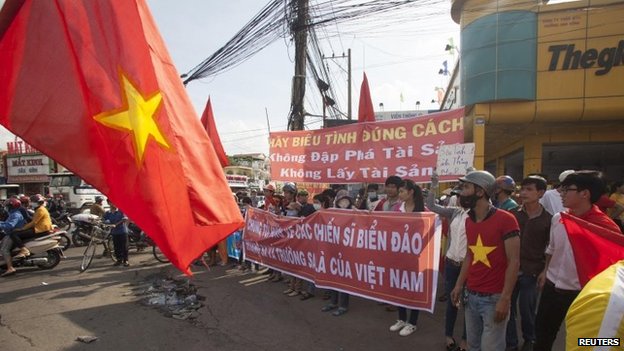 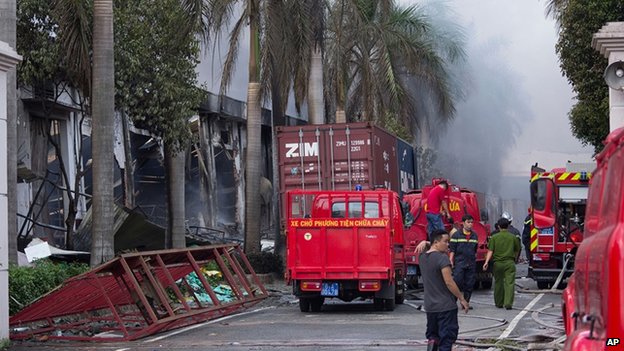 Reports said some people were trying to leave the country. More than 600 Chinese people had crossed into Cambodia at one border checkpoint alone, Cambodian officials said.

The BBC’s Cindy Sui says that Taiwanese airlines are flying bigger planes into Vietnam’s airports, and there has been at least one chartered flight to Vietnam to bring back Taiwanese nationals.

Taiwan’s envoy in Vietnam said one Chinese worker was killed and 90 other people injured.

A local police official also confirmed this account. “One Chinese worker is dead. We are trying to identify the body,” he told AFP news agency.

In a statement quoted by Reuters news agency, the company said its Vietnamese and Taiwanese workers were not attacked.

Taiwan’s envoy told AFP news agency that rioters forced Chinese workers into a corner of the factory. “The rioters have gone but we are all still concerned they might come back,” he said.

On Wednesday, Vietnamese authorities said at least 200 people had been arrested over the violence at the industrial park in Binh Duong.

The BBC’s Nga Pham says the protests have confirmed the government’s worst fear that nationalism could easily get out of hand, posing a risk not only to the business environment but also to domestic political stability.

China’s tourism body has urged its nationals to “carefully consider” any travel to Vietnam.

China’s Haiyang Shiyou 981 oil rig was brought into waters west of the disputed Paracel Islands earlier this month, leading to collisions between Vietnamese and Chinese ships as Vietnam sought to block the move.

China claims a U-shaped swathe of the South China Sea, including several areas that its South East Asian neighbours say belong to them.

In recent years it has started to enforce these claims more assertively, leading to severely strained ties with the Philippines and Vietnam in particular.

The Philippines is currently taking China to a UN court to try to resolve the issue.

Are you in Vietnam and were you at a recent protest? Are you Chinese and living in Vietnam? Email us at haveyoursay@bbc.co.uk adding ‘Vietnam protests’ in the subject heading and including your contact details.