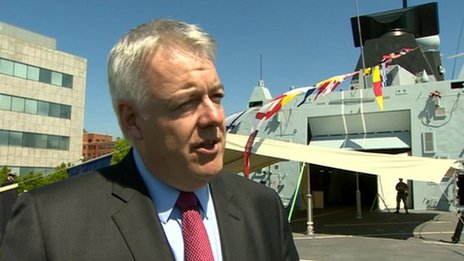 First Minister Carwyn Jones says Welsh and UK ministers are constantly discussing events they want to hold around the Nato summit in Newport.

He was reacting to criticism from the Celtic Manor, which is hosting the summit, in which managers said they were concerned about preparations.

They expressed worries not enough was being done to ensure Wales benefits.

Mr Jones and the Welsh Secretary also announced a business summit is to be held after the summit.

Carwyn Jones said political differences between the two governments were being put aside during preparations for the summit, to be held on 4 and 5 September.

The two men were speaking during a visit to HMS Dragon, which is currently moored in Cardiff Bay and is to receive the freedom of Cardiff this weekend.

On Tuesday, the Celtic Manor Resort chief operating officer Ian Edwards told MPs that politicians had to prepare more to use the summit to sell Wales to the world.

He said: “I think the first minister has got to say to the prime minister, ‘Look, we are 100 days to go; we’ve got nothing nailed down in terms of outreach programmes. How are we going to benefit from this?

“If we don’t do it now and we don’t line everything up we will miss that opportunity.”

Responding to the criticism on Thursday, Carwyn Jones said his administration was working hard with the UK government, which is organising the summit for Nato, “to make sure that we can host a number of events around the summit”.

“We need to know the final arrangements first, of course, and discussions are ongoing,” he said.

“Because, of course, of the fact that security around the event is very tight we can’t reveal anything publicly at this moment in time .”

“Wales, of course, is home to a number of important defence related industries, we’ve got a number of them close to the Celtic Manor, where the summit will be held,” he said.

“And I think it’s a huge opportunity for those industries in particular to benefit from the world attention that will be focussed on Wales for those days.”