BBC News – Why is Libya lawless? 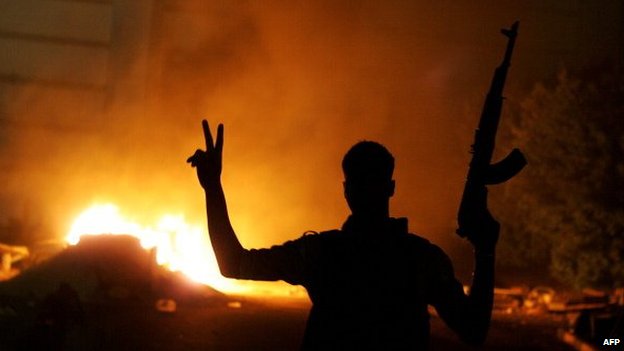 Libya has been hit by instability since the overthrow of long-serving ruler Col Muammar Gaddafi in October 2011. Militias rule large swathes of territory, with successive governments struggling to exercise control.

Who is in control of Libya? 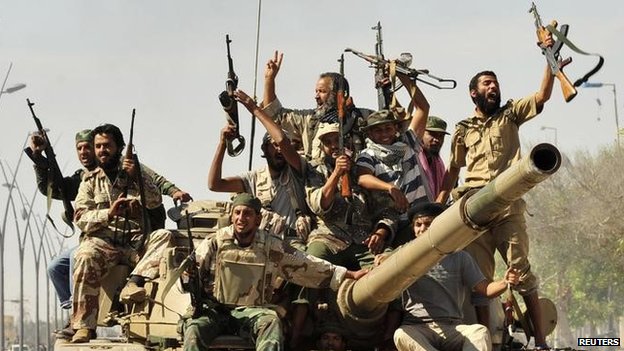 No-one – that is the problem. There are lots of different armed groups – up to 1,700 – with many different goals. But money and power is a common denominator.

During the uprising, anyone with a gun could command respect and some do not want that to change. Instead, they seem more determined than ever to gain more territory and impose their will.

They are also ideologically divided – some of them are Islamists, others are secessionists and yet others are liberals. Furthermore, the militias are split along ethnic and regional lines, making it a combustible mix. Some fear Libya could descend into civil war.

Who are the militias?

Weren’t they once allies? 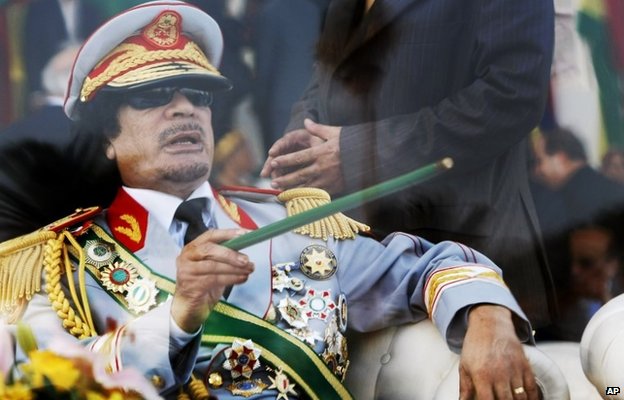 They were united in their hatred for Col Gaddafi – but nothing more. There was no single group in charge of the rebellion. Militias were based in different cities, fighting their own battles.

Several felt they had paid a particularly high price during the conflict and should be rewarded. And after more than four decades of authoritarian rule, they had little understanding of democracy. So, they were unable to forge compromises and build a new state based on the rule of law. As a result, Libya has had five governments since the 2011 revolution.

Didn’t they receive outside help? 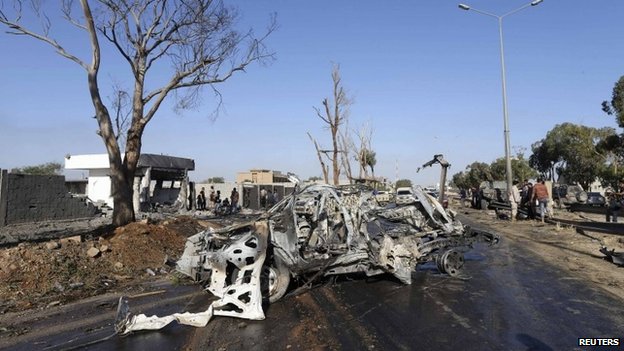 Very little. The US had pledged to help the new government recover weapons – especially anti-aircraft missiles that had gone missing when Col Gaddafi’s government crumbled.

But Libya remains what some security analysts describe as an arms bazaar. It is awash with weapons which have also ended up in the hands of other armed groups in the region. There is no top-level mediation effort either – by Western powers or regional bodies like the Arab League and African Union (AU).

The West and Arab League appear to be more concerned about the instability in Syria and Egypt. As for the the AU, it has little influence in Libya – it opposed the Nato-backed offensive to oust Col Gaddafi, and is viewed with deep suspicion by Libya’s authorities.

Yet African countries are most concerned about the conflict, fearing it could worsen instability in countries such as Mali and Niger. Weapons from Col Gaddafi’s looted arsenals are also said to have been smuggled to the Sinai, Gaza and even Syria.

Have foreigners been threatened? 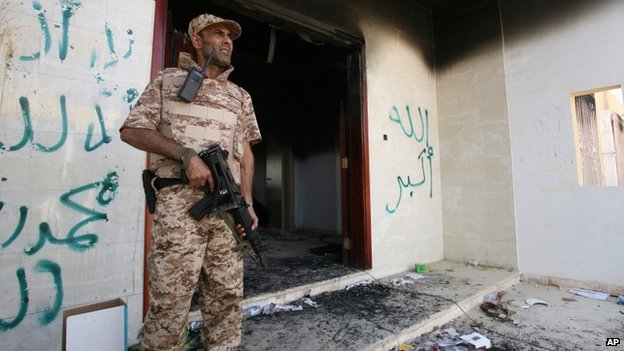 Yes. There have been a spate of attacks on diplomats in 2012 and 2013. They include the killing of US Ambassador Christopher Stevens in Benghazi, where the uprising against Col Gaddafi began, and the kidnapping of the Jordanian ambassador Fawwaz Eitan, who was released in exchange for a jihadist. There were also attacks on the Italian consulate in Benghazi, as well as the French and the Russian embassies in Tripoli.

The US appears to be carrying out covert operations in Libya to neutralise the threat. It responded to Mr Stevens’ death by capturing al-Qaeda suspect Anas al-Liby in Tripoli in October 2013.

Militias have also seized oil terminals, operated by Western firms. It has led to a huge fall in production, but has not had a major impact on the global oil market.

Why gunmen have turned off Libya’s oil taps

Which are the main militias? 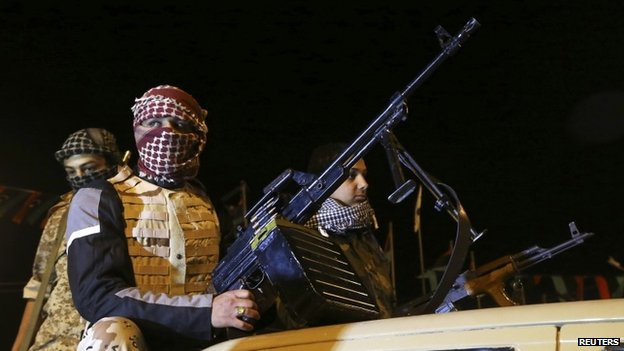 Ansar al-Sharia is said to be the most dangerous Islamist armed group in Libya. It was blamed for Mr Stevens’ killing, and is said to have forged links with other Islamists groups. Some analysts say Ansar al-Sharia have men who fought in Syria, though there has been no independent confirmation of this.

Colonel Khalifa Haftar also has a powerful militia. He was behind the 16 May air attack on a military air base in Benghazi and the assault two days later on the parliamentary building in Tripoli. He says his objective is to defeat Ansar al-Sharia, though government officials accuse him of being a renegade simply driven by a thirst for power.

Who is Col Haftar? 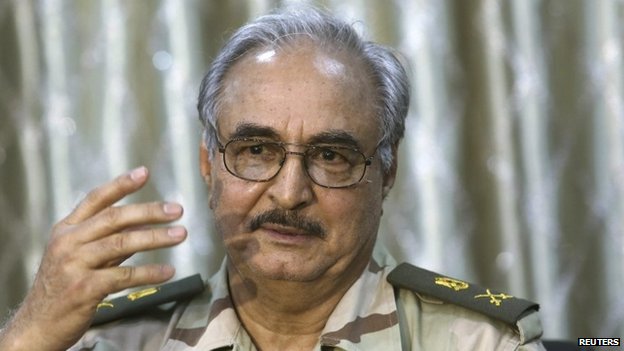 Col Haftar helped Col Gaddafi seize power in 1969, and played a key role in Libya’s military incursion into Chad in the 1980s. He later fell out with Col Gaddafi, and fled to the US.

He resurfaced in Libya during the uprising against Col Gaddafi’s rule, and built a militia that drew in other ex-Gaddafi loyalists. To many Libyans, he remains a shadowy figure who has caused much instability. His main base is in Benghazi, but he has shown his influence stretches to Tripoli.

How do Libyans feel? 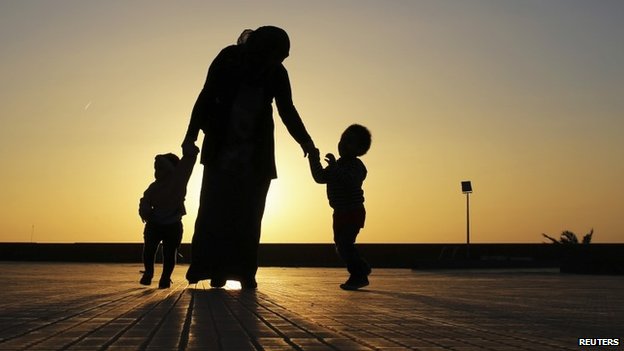 Many of them live in fear – and have to move to safe places when fighting breaks out. They feel their dreams have been shattered – like many in neighbouring Egypt and Tunisia after their own popular uprisings.

But the situation in Libya is far more anarchic – that is because the army disintegrated after Col Gaddafi’s fall, unlike in Egypt. Moreover, Libya has never had well-established political groups – like Egypt’s Muslim Brotherhood and Tunisia’s Ennahda – to champion the interests of their constituents.

So, the government is at the mercy of the militias. In fact, it pays many of the militiamen, hoping they will switch loyalties and help build a new national army but there is little evidence of that happening.