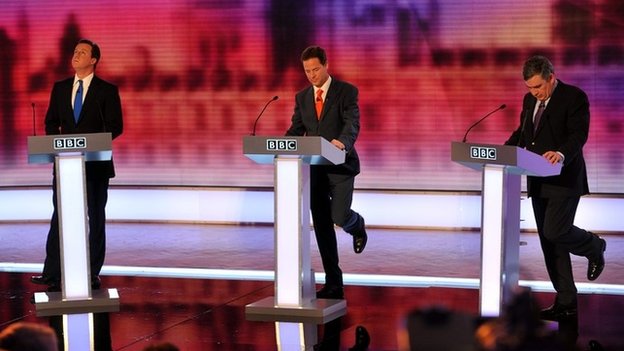 YouTube, the Daily Telegraph and the Guardian have announced they are making a joint bid to host a leaders’ debate before next year’s General Election.

Such a debate, broadcast online, would be free of the rules on balance which broadcasters such as the BBC, ITV and Sky have to follow,

This would mean there would be more freedom over which leaders took part.

YouTube, the Telegraph and the Guardian have said if they did stage a debate it would be hosted by a female moderator.

A pitch from an additional group, on top of the BBC, ITN and Sky, would change the nature of the negotiations prior to any debates, by offering the politicians an alternative outlet in addition to, or even instead of, the traditional broadcasters.

The new consortium said its proposal had been in preparation for months and had been sent to the main party leaders on Thursday following informal talks with politicians.

This proposal may allow more debates than last time. It may, on the other hand, kill off the idea of TV debates altogether. ”

The Guardian said the consortium wanted to find ways of engaging a younger and more interactive audience and that a live feed of the debate could be embedded on any media site and be carried by any broadcasters on traditional TV and radio.

It said the boundaries between TV and the web, including newspaper websites, had eroded and the three media groups believed they could reach audiences alienated by traditional broadcasters.

The consortium said it was open-minded about the precise format for the debate.

Telegraph Media Group editor-in-chief Jason Seiken said: “The power of digital media comes in its ability to connect our leaders and the public in a two-way conversation.

“It appeals to millions who have not previously bothered to engage in the political process.”

Guardian editor Alan Rusbridger said: “The digital world has become an increasingly vital democratic tool and forum for debate, and it’s imperative that politicians understand and embrace the opportunities afforded to them by it.”

The three debates were staged in consecutive weeks during the five-week election campaign, broadcast by Sky News, ITV and the BBC respectively.

Mr Clegg and Labour leader Ed Miliband have called on Mr Cameron to “sign on the dotted line” to stage a repeat of that format next year, with the 2010 format as a “starting point” for negotiations.

Mr Miliband has accused Mr Cameron of “dragging his feet” over starting negotiations with the broadcasters amid calls from UKIP leader Nigel Farage and Green leader Natalie Bennett to be included.

Earlier this month, Mr Cameron told the BBC: “I’m very keen to examine all the formats that we could have and I’ve suggested that perhaps we should have one debate with all the parties in, so that everyone can have their say, and perhaps we could have a debate where the two people who could actually be prime minister debate directly with each other.

“I don’t think you could have a party like UKIP, without an MP, without the Greens, who have got an MP. So there are quite a lot of issues that have to be ironed out.

“We can let our teams negotiate in the Autumn for the start of the TV debates before the next election.”