Louis van Gaal has been named as Manchester United manager, with Ryan Giggs as his assistant.

The Dutchman, who has won titles with Ajax, Barcelona, Bayern Munich and AZ Alkmaar, will take charge at Old Trafford after leading the Netherlands at this summer’s World Cup in Brazil.

Van Gaal said he had always wanted to work in the Premier League.

He added: “To work as a manager for Manchester United, the biggest club in the world, makes me very proud.

“I have managed in games at Old Trafford before and know what an incredible arena Old Trafford is and how passionate and knowledgeable the fans are.”


After ending the reign of Moyes in April

after a troubled 10 months, United executive vice-chairman Ed Woodward is convinced he has appointed the right man this time.

“His track record of success in winning leagues and cups across Europe throughout his career makes him the perfect choice,” said Woodward.

“In Louis van Gaal, we have secured the services of one of the outstanding managers in the game today.

“Old Trafford provides him with a fitting stage on which to write new chapters in the Manchester United story.
”

It seems Van Gaal has wasted no time in making his intentions clear.

“Louis has already communicated some great ideas for how the club can move forward,” said United co-chairman Avie Glazer.

“The board is right behind him in his plans and everyone here is already looking forward to the start of next season.”

Giggs, 40, who took charge for the final four games of the season following the departure of Moyes, met Van Gaal in the Netherlands last week to talk about his future. 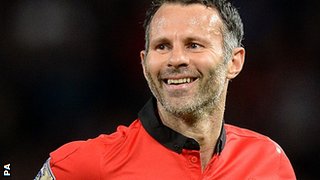 His appointment as assistant

marks the end of an illustrious playing career

during which he won 34 major trophies in 802 starts and 161 substitute appearances.

“I am thrilled to have the chance to serve as assistant manager,” said the Welshman.

“Louis van Gaal is a world-class coach and I know I will learn a lot about coaching from being able to observe and contribute at such close quarters.

“Manchester United has been a huge part of my life and I’m delighted to be able to continue that relationship in such a key role.”

United finished seventh in the Premier League, after a title defence that featured one-sided defeats by Manchester City, Liverpool and Chelsea.

Club legend Giggs, Real Madrid boss Carlo Ancelotti and Borussia Dortmund manager Jurgen Klopp had been linked to the post, but Van Gaal is the man trusted to restore the club to the top of the domestic and European game.

Former United assistant manager Mike Phelan told BBC Radio 5 live said: “He’s got a big personality, but for a club like Manchester United that’s what is required. You have to get on with the job and hit the ground running and I’m sure he will do that.”

Known for employing an attacking style and his demands for discipline from his players, he came to prominence when he guided a young Ajax team, featuring Clarence Seedorf, Edgar Davids and Patrick Kluivert, to a Champions League final victory over AC Milan in 1995. 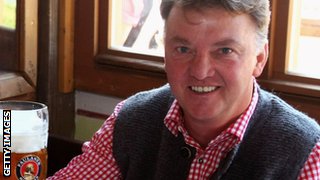 Van Gaal claimed in his 2009 autobiography he had been lined up to replace Sir Alex Ferguson at United in 2002, but the Scot changed his mind to continue at the helm for another 11 years.

He won two Spanish league titles with Barcelona, but failed to qualify for the 2002 World Cup with the Netherlands.

Van Gaal returned to Barca, but left the Catalans only three points above the relegation zone in La Liga when he was dismissed after half a season.

He revived his reputation back in his homeland, leading AZ Alkmaar to only the second Dutch title in their history, and then, in his first season in charge, took Bayern Munich to the German title and the Champions League final in 2010.

He was dismissed after results tailed off in the following campaign but laid the foundations for Bayern’s current domination of German football by promoting young players such as midfielder Thomas Muller.

He has a strong relationship with United striker Robin van Persie, whom he installed as Netherlands captain in June 2013, and is expected to be given significant transfer funds to bring in new players as the club plot their path back to the top.

“I have been extremely impressed by his intelligence, thoughtful approach to the role and his diligence,” said Woodward. “I am looking forward to working with him.”