by winning the PGA Championship.

The 25-year-old came from seven shots behind 54-hole Wentworth leader Thomas Bjorn to card a six-under-par 66 and win by one.

Bjorn blew a six-stroke lead early on to finish two back with Luke Donald.

“When I was inside the ropes it was a little bit of a release. I was on my own, doing what I do best and it gave me four or five hours of serenity or sanctuary, whatever you call it,” said world number 10 McIlroy after his first win on European soil.

McIlroy and former world number one tennis player Wozniacki, 23, had been in a relationship since 2011 and the golfer proposed to the Dane on New Year’s Eve. 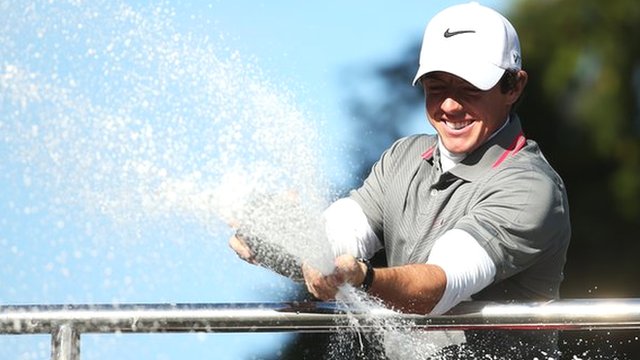 McIlroy, who experienced a form slump in 2013 following his

last tasted success at the

Australian Open at the end of last year.

The Northern Irishman said the past few days had been bizarre ahead of a busy June, which includes the US Open.

“I can’t explain it. It’s obviously a week of mixed emotions,” he added. “I am looking at the trophy saying ‘How the hell did it happen?’.

“I was asked in an interview how I feel and I don’t know. I feel happy that I’ve won but it’s been a weird week.

“I really wanted to win before going into the second major of the season. I couldn’t have asked for a better way to prepare.”

Donald, who like McIlroy has reached the summit of the world rankings, said he thought the world might again see the best of his Ryder Cup team-mate.

He said: “I’m happy for Rory. We all know what he’s been going through and sometimes making those tough decisions maybe takes a weight off your mind in a way and he can engulf himself in the golf.”

McIlroy, who equalled Simon Khan’s 2010 tournament record for the largest final-round comeback, began the day with plenty of ground to make up on 15-time tour winner Bjorn, 43.

However Lowry showed McIlroy the way by closing the gap with an eagle at the fourth and in the space of 15 minutes Bjorn’s huge advantage had evaporated, the Dane bogeying the fifth and then racking up a horrible seven at the following hole. 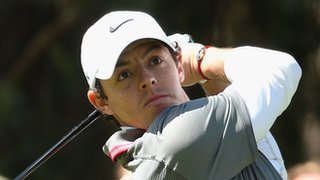 Lowry moved into a three-shot lead before a costly doubly bogey six at the 13th, while McIlroy was producing a stunning par save at the par-three 14th.

McIlroy then birdied the closing two par fives, the long 17th and treacherous 18th, to leave his rivals in his wake and become the first Northern Irish winner of the European Tour’s flagship event.

Last year’s European number one and third-ranked Henrik Stenson, who had a chance to steal the world number one berth away from Adam Scott this week, posted a final-round 70 to be tied-seventh.

Scott, who started the day needing to finish inside the top 13 to retain top spot, fired a final-round four-under 66 at the Crowne Plaza Invitational in Texas to join US PGA Championship winner Jason Dufner as clubhouse leader.