Manchester City’s Yaya Toure wants assurances that he will have a “job for life” at the cub, his agent has said.

The 31-year-old midfielder was said to be

by a perceived lack of respect shown to him by City’s owners, causing speculation that he may leave.

But Dimitri Seluk says Toure wants the “same club for as long as possible”, citing legend Zinedine Zidane’s role as an advisor and coach at Real Madrid. 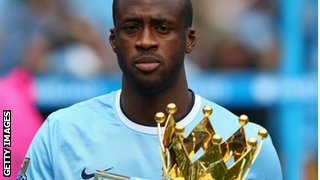 On Tuesday Seluk said Toure could leave City because the club’s owners showed him a lack of respect on his 31st birthday, ignoring him when the squad arrived in the United Arab Emirates last week to celebrate their Premier League title triumph.

City, who presented Toure with a cake and tweeted their congratulations, are believed to have no intention of selling the midfielder who has three years left on a contract extension signed in April 2013.

Seluk denied that Toure’s apparent disappointment with the City hierarchy was a tactic aimed at increasing his earnings after a season in which he scored 24 goals in 49 games.

“People think we did this because we want to change the contract, to make more money,” Seluk told BBC Sport.

“About money, the contract is OK. For us the most important is attention from the club to whom Yaya gives a lot.”

France international Zidane, who played for Real Madrid for five seasons and scored

the winning goal in their Champions League final win over Bayer Leverkusen in 2002,

has stayed on at the club after retiring, firstly in a role as advisor to president Florentino Perez and then as assistant to current manager Carlo Ancelotti.

from Barcelona in 2010, was linked with a return to the Catalan giants when Seluk made his initial comments on Tuesday.

after the World Cup in Brazil.

Ivory Coast are in Group C alongside Colombia, Greece and Japan.