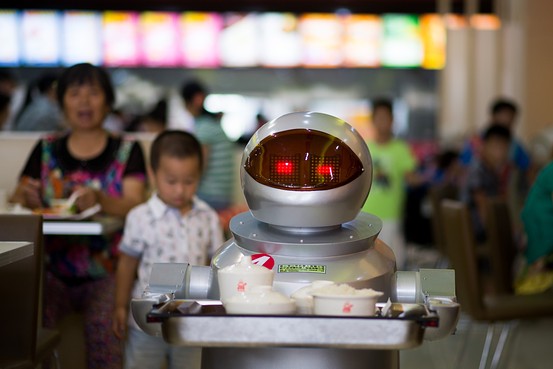 Spending on robots is exploding around the world and projected to hit $67 billion a year by 2025, with the fastest growing area for robots in the coming years will be “personal” uses. Here, a robot carries food to customers in a restaurant in Kunshan, China.
Agence France-Presse/Getty Images

Spending on robots is exploding worldwide and is projected to hit $67 billion a year over the next decade.

The boom isn’t limited to advanced economies either, says a new report from the Boston Consulting Group. It’s no big surprise that demand is highest in notoriously robot-happy places like South Korea and Japan. But the fastest-growing market is actually China, a country that built its industrial backbone on the basis of cheap labor.

According to the report, annual spending on robots will reach about $27 billion next year and more than double to nearly $67 billion by 2025. “As prices come down and new performance thresholds are crossed, robots are migrating from industrial and military uses to commercial applications and the personal-services realm,” said the report.

The fastest-growing area for robots in coming years, says BCG, will be “personal” uses like entertainment, cleaning, and education—which is expected to grow from $1 billion in 2010 to $9 billion in 2025. However, industrial uses will remain the bread and butter of the industry, accounting for the lion’s share of the market in the future, as it is today.

The trend is truly global. Robots are now used to slice and pack lunch meats in Sweden and churn out razors in the Netherlands. “At some factories,” the report notes, “robots are even building other robots, producing about 50 robots per 24-hour shift and operating unsupervised for as long as 30 days at a time.”