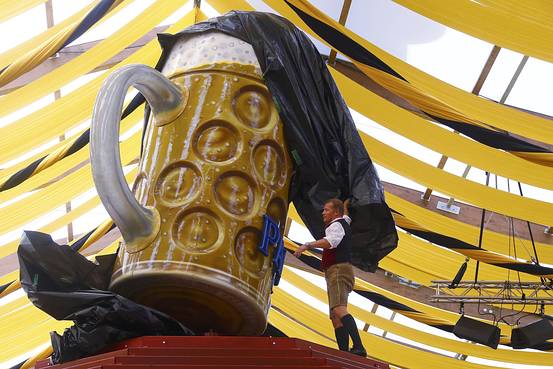 Andreas Steinfatt of the Paulaner brewery unveils a model of a huge beer mug in preparation for the 182nd Oktoberfest, which opens in Munich, Germany, on Sept. 19.
Reuters

Economists at UniCredit may have found the solution to chronically weak inflation in Europe: More Oktoberfests.

Saturday kicks off the 182nd Oktoberfest in Bavaria. And based on UniCredit economist Thomas Strobel’s forecasts, prices look set to jump this year.

UniCredit’s Wiesn Visitor Price Index, or WVPI, should rise 3.6% this year, up from 2% last year. The index includes the cost of public transportation plus two liters, or Mass, of beer and half a grilled chicken. The beer-only component is expected to rise 3%, the bank forecasts, with the average price of a Mass of beer crossing the psychologically important €10 ($11.27) threshold.

That compares with annual German and eurozone inflation of 0.1% in August, according to data Wednesday from Eurostat. The European Central Bank targets inflation rates near 2% and in March embarked on a €1 trillion-plus quantitative easing program to ensure it gets there.

But would a better strategy be to simply ply Europeans with beer and chicken, or have the ECB helicopter some of that €1 trillion in new money onto Munich instead of just buying bonds? Unfortunately, that probably wouldn’t get inflation back to target.

“Increasing Wiesn prices are not expected to impact the low inflation expectations in Germany and in particular the eurozone,” Mr. Strobel wrote.

“Beer prices contribute almost 1% to the basket of goods used to calculate the inflation rate in Germany, hence they would need to triple—holding all other prices constant—to reach the ECB’s inflation target of 2% for Germany,” he noted.

UniCredit’s research also suggests Germany has a defense against critics who say the country’s large trade and current account surpluses act as a drag on growth in other European economies. Germany’s current account surplus is expected to exceed 8% of its gross domestic product this year, according to International Monetary Fund data.

But its books are pretty balanced when it comes to beer.