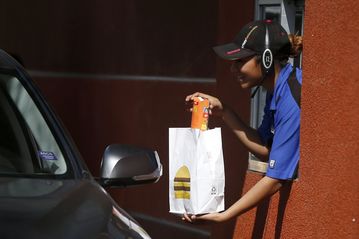 A McDonald’s employee passes an order to a driver at a restaurant in Los Angeles, California.
Reuters

McDonald’s Corp.’s pledge to raise the pay of hourly employees by more than 10% will further fuel the unusual trend of wage gains being led by the bottom of the labor market.

McDonald’s says it will pay employees at company-operated stores at least $1 per hour more than the local minimum wage. As a result, average pay for those workers will increase to more than $10 an hour by the end of next year, from $9.01 currently.

The pay increase would push rank-and-file McDonald’s workers’ average wages above the industry average for fast-food restaurants, according to the Labor Department.

While the move applies only to the roughly 1,500 company-owned restaurants in the U.S., it puts pressure on more than 10,000 franchisees and other businesses throughout the food-service industry to at least match that pay level.

Already pay gains in the food-service industry is by far outstripping tepid overall wage growth.  From a year earlier, average hourly earnings for non-manager employees at fast-food restaurants like McDonald’s rose 3.5% in January to $9.54 an hour, well above 2.2% pace for all private-sector workers. 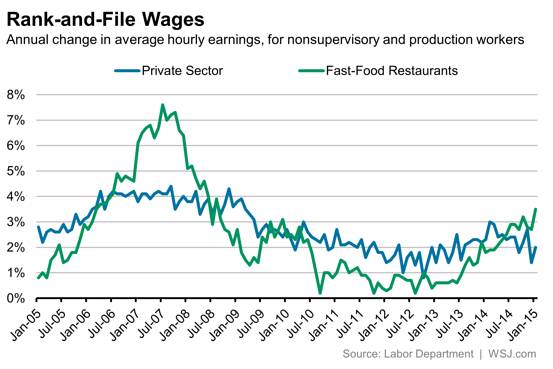 Pay gains in the broader food service and drinking paces category advanced an even faster 3.9% in January from a year earlier.

The pay increases come as many restaurant owners are now scrambling to hire and retain workers.

“There is a lot of competition…That’s pressing us, in a positive way, to increase wages,” Jennifer Durham, vice president of franchise development at Checkers Drive-In Restaurants Inc., said in February.

The deep recession left a glut of labor for restaurants to choose from—both higher-skilled workers who lost better paying jobs and the lower-skilled people the industry more typically hired. An excess supply of labor tends to depress wage growth.

Now hiring has picked up and skilled workers with restaurant jobs are frequently looking for work in other fields. As they leave kitchens and counters, it creates shortages of workers with food-service backgrounds.

But the outsized growth in restaurant wages might not be an entirely positive sign for the broader economy. In the previous two cycles, pay gains for restaurant workers peaked very late in the expansion, after broader wage growth plateaued. If escalating restaurant wages mark the end, rather than start, of wider wage growth, that would limit the economy’s ability to accelerate.

A pickup in inflation for the current historically low level, however, could be interpreted as a sign of a strengthening U.S. economy. A broad measure of price increases tracked by the Federal Reserve has undershot the central bank’s 2% target for nearly 3 years.