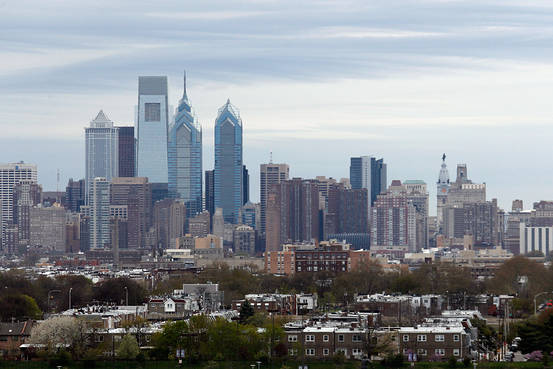 Not a single city with a population above 300,000, such as Philadelphia, reported that economic conditions had worsened over the last year and 23% said they had improved greatly.
BRUCE BENNETT/GETTY IMAGES

Bigger is better for American cities these days.

That is one of the findings in a new report from the National League of Cities that looks at the economic health of cities across the country.

Overall, cities have seen marked improvement in their economic well-being from a couple of years ago. Forty percent of mid-sized cities with a population of 100,000 to 299,999 reported that local economic conditions had greatly improved during the past year. That is compared with just 20% of cities with fewer than 50,000 residents. 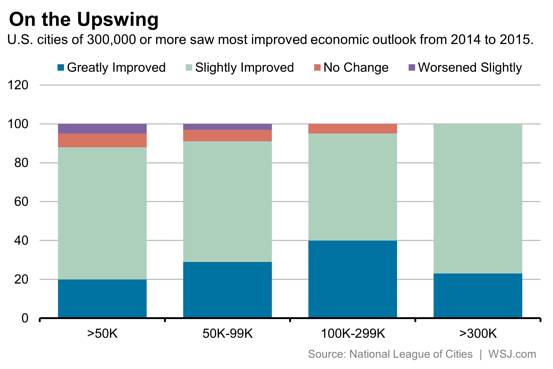 That underscores a story that has played out throughout the recovery, as large urban areas from New York City to Seattle have seen an influx of young workers in search of jobs and affluent older residents seeking a more walkable lifestyle. Meanwhile, smaller cities that had often relied on a particular industry and a heavy number of manufacturing jobs have struggled to take the same leap forward.

The results were significantly more upbeat than the last time the National League of Cities took the survey in 2013. Overall, 28% of cities surveyed in 2015 said that economic conditions had improved greatly, compared with just 8% in 2013.

“We know that recovery is starting to take hold,” said Christiana McFarland, research director at the National League of Cities.

One of the biggest challenges facing cities across the board is that the recovery is benefiting skilled recent college grads, but leaving behind many of the middle-class residents who have lived there for decades through some of the worst economic periods.

“Unfortunately that growth doesn’t extend to everyone in our communities, and wealth and skills gaps are widening,” said National League of Cities President Ralph Becker, the mayor of Salt Lake City, in a statement.

Residential property values, for example, increased in 79% of cities over the past year, bringing new tax revenues and reflecting a desire of people to live there. But one-third of cities surveyed also said that a lack of affordable housing is a leading threat to their economic health.

“It’s increasingly making it much more difficult for a middle-income person, pricing them out of the market for homeownership,” Ms. McFarland said.

Those challenges come at a time when cities are increasingly taking the lead in trying to develop and preserve affordable housing, as government programs have been cut. Many are exploring changes to zoning codes that would strengthen requirements that developers of new luxury housing including units for low- and middle-income residents.

Cities such as Los Angeles also have passed higher minimum wages in an effort to address the fact that many of the new jobs created in the service sector make it difficult to afford rents and housing prices there. It is unclear how successful those approaches will be.

Here Are the U.S. Cities Where Wage Growth Has Lagged Job Growth