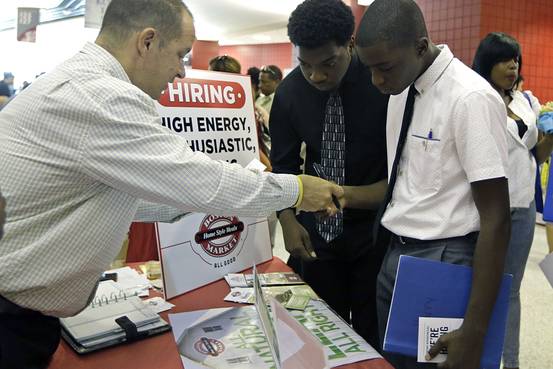 We know that the economic recovery’s effects have been unevenly felt. The recovery has been kind to those who invested in certain stocks or whose title begins with the word “chief.” It’s been less charitable to certain groups, like African American workers, whose unemployment rates have lingered in the double-digits for most of the past eight years.

For the first time since 2007, the national unemployment rate for African Americans dipped below 10 percent in the second quarter of 2015,  according to the Labor Department. Despite that improvement, at 9.5 percent, it’s still nearly twice the national average of 5.3%, and more than double the 4.6% rate for whites.

Similarly, the ratio of unemployment rates for black and white workers swings from the low end in Tennessee, where the black unemployment is 1.2 times that of whites, to a ratio of 5.1 in Washington, D.C. Dr. Wilson attributes the especially high rate of black unemployment to the District’s concentrated urban population, which she said is not entirely comparable to state populations.

Why the gap? Dr. Wilson points to education and work experience as two major factors. Twenty-two percent of blacks had completed four years of college in 2014, versus 32% of whites, according to the Census Bureau.

However, as researchers at the Center for Economic Policy Research have pointed out, that piece of paper is no hedge against unemployment: a 2014 analysis found that 12.4% of black college graduates aged 22 to 27 were unemployed, compared with 5.6% of all college graduates in the same age group.

So what else explains the gap? Unsurprisingly, discrimination appears to be at play. Using what are known as “audit surveys,” researchers have found that black job applicants are less likely to get called back for job interviews or hired, compared with white and Hispanic applicants with identical credentials. One well-known 2009 study by Devah Pager, Bruce Western and Bark Bonikowski used trios of actors, one black, one white, and one Hispanic, to apply for low-wage jobs like sales associate or waiter around New York City. The study found that blacks without a criminal record fared about as well as whites with a stated criminal record (i.e., who listed their parole officers as a reference).  “The findings suggest that a black applicant has to search twice as long as an equally qualified white applicant before receiving a callback or job offer from an employer,” the authors wrote.

William Spriggs, chief economist with the AFL-CIO and the former chair of Howard University’s economics department, points to the large variations by state as evidence that local labor market dynamics play a role, specifically, the informal flow of information about job opportunities within a racial group.

“Tennessee isn’t five steps ahead of South Carolina,” a state with 12.8% black unemployment, he said. “The labor market is highly segregated by race, in terms of information flows.”

Labor market cycles may also be a factor: a 2012 paper, “Who Suffers During Recessions?” by Hilary Hoynes, Douglas Miller and Jessamyn Schaller, found that “men, blacks, Hispanics, youth, and those with lower education levels experience more employment declines” relative to women, whites and the more educated, due the more highly cyclical nature of the industries in which they were concentrated, such as construction or manufacturing, which are particularly sensitive to economic booms and busts.

African-Americans took one of the hardest hits during the financial crisis, losing one-third of their aggregate household wealth between 2010 and 2013, a Pew Research Center analysis found. Even in a recovery, with so many still looking for work, it’s hard to envision how those families can begin to rebuild.

The June Jobs Report in 10 Charts