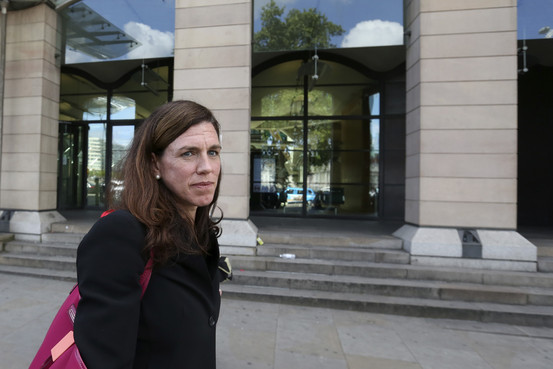 Kristin Forbes, the latest appointee to the Bank of England’s Monetary Policy Committee, leaves after testifying before lawmakers in London.
Bloomberg News

Kristin Forbes, a former economic adviser to President George W. Bush and the latest appointee to the Bank of England’s Monetary Policy Committee, on Wednesday highlighted a risk to economic recovery that is preoccupying central bankers on both sides of the Atlantic: Investors appear too sanguine about risk.

Ms. Forbes, a professor of economics and management at the Massachusetts Institute of Technology, was in London giving evidence to Parliament’s treasury committee before she assumes her BOE job July 1.

In written and oral testimony, she noted measures of volatility in financial markets are muted and some risky assets appear underpriced relative to less risky alternatives, such as emerging-market equities and the bonds of some troubled euro-zone economies.

“Something’s not quite right,” she told lawmakers.

The worry for central bankers at the BOE and the Federal Reserve is that raising interest rates and unraveling the extraordinary stimulus policies they have put in place in recent years could cause big swings in markets and undermine the U.K. and U.S. economic recoveries. A harbinger of such potential turbulence occurred last year when Fed officials started talking about slowing the pace of their monthly asset purchases, sending markets into spasms.

The problem is there’s not a lot central banks can do to soothe investor jitters if and when they do return except to carefully set out what policy makers plan to do next, Ms. Forbes said.

Ms. Forbes succeeds Ben Broadbent, who is moving into the BOE deputy governor seat to be vacated by the soon-to-retire Charles Bean. She is one of a handful of new faces to join the MPC. Nemat Shafik, a former International Monetary Fund official, joins in August. Andrew Haldane, the BOE’s former financial stability director, joined earlier this month as chief economist.

In her testimony, Ms. Forbes didn’t veer much from the BOE’s central view of the U.K. economy. She said she expects wages and productivity will pick up as the economy strengthens, for example, and certainly didn’t drop any hints that she’s fearful of inflation and wants a quick rate rise.

Asked about getting rid of the £375 billion of bonds the BOE has bought in a three-year stimulus push known as quantitative easing, Ms. Forbes said some of them could be allowed to reach maturity in the next few years. But she said with the average maturity of the debt on the BOE’s books quite long, officials will also eventually have to work out a program of sales.