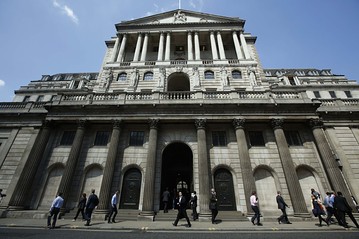 The Bank of England in the City of London.
Reuters

An abiding mystery of the U.K.’s recent economic experience has been an unprecedented collapse in the nation’s productivity. A new paper from the Bank of England tries to explain the shortfall but the authors admit they still haven’t fully cracked it.

British productivity was growing steadily if slowly in the years before the financial crisis struck but it’s now some 16% below its precrisis level. Official data shows the U.K.’s productivity performance against its peers has been even more horrendous.

Productivity, usually measured as output per worker or output per hour, or output generated by a mix of labor and capital, is an important gauge of an economy’s health and a key to rising living standards. More productive economies tend to grow faster over the long-run.

It is also an important indicator for a central bank. Poor productivity growth means an economy tends to start bumping up against capacity constraints sooner, stoking inflation.

The BOE paper, published in the central bank’s quarterly bulletin of economic research, examines the competing explanations for the productivity puzzle and has a stab at estimating how much of that 16% shortfall they can account for. At best, the authors say they can explain about nine percentage points, underscoring just how deep a mystery this is.

The paper suggests another three to five percentage points of the shortfall may reflect problems that owe a lot to the legacy of the financial crisis. These include the idea that damaged banks have struggled to reallocate scarce capital away from “zombie” firms with poor prospects and few customers and towards more productive firms with big ambitions. Cyclical factors—such as idling workers and production lines—probably also account for part of the productivity shortfall, but the authors say it’s hard to say how much.

The paper is nevertheless reasonably upbeat about the prospects for productivity to eventually recover. BOE Gov. Mark Carney has in the past said the alternative—a permanent, Soviet-style collapse—is too unlikely in an advanced economy such as Britain.

In separate papers, the BOE’s economists also find that inflation expectations are in line with the Monetary Policy Committee’s 2.0% target, while Britons expect that a rise in interest rates will be gradual, consistent with the MPC’s guidance.