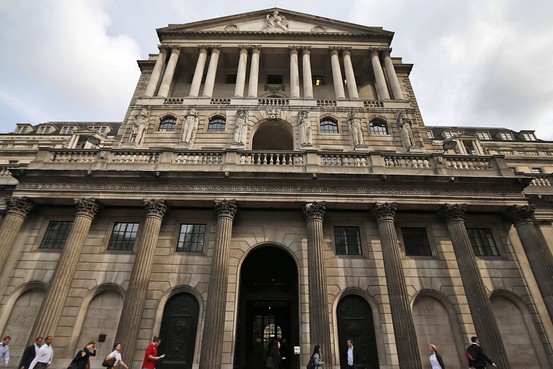 The Bank of England published a paper Thursday which concluded that there is indeed some evidence of insurers behaving pro-cyclically. The evidence on pension funds was less clear cut.
Associated Press

One strand of the global effort to make the financial system safer has been addressing the question of how to reduce the tendency for participants in financial markets to behave in ways that can fuel bubbles on the way up and deepen the slump on the way down.

So far, regulators’ efforts have mostly focused on leaning against such “pro-cyclical” behavior at banks, with the aim of ensuring they keep lending come economic rain or shine.

A paper published by the Bank of England Thursday asks whether pro-cyclical tendencies are also evident among asset owners such as insurers and pension funds, and whether this behavior might have undesirable consequences for financial stability and the wider economy.

In the paper, a group of industry figures, BOE staff and academics concluded that there is indeed some evidence of insurers behaving pro-cyclically. The evidence on pension funds was less clear-cut.

The research underscores how central banks and regulators, six years after the collapse of investment bank Lehman Brothers Holdings Inc., are looking outside the banking system to see where else the financial system might be vulnerable.

Pro-cyclical behavior among major asset owners is potentially problematic for several reasons. For one thing, these investors own £3 trillion ($5 trillion) of assets in the U.K. alone, and if they were to sell in concert during a downturn the resulting fall in prices could force others to sell and cause problems in the wider financial system.

Officials acknowledge that a degree of what lies behind pro-cyclical behavior is simply human nature, driven by greed and fear.

But the paper also delves into whether, in the U.K. at least, accounting rules and other regulations aimed at protecting insurance-company policyholders and future retirees from losses may be inadvertently encouraging the sort of herd-like behavior that amplifies swings in financial markets.

Rule changes in the 1990s sent pension funds piling into inflation-proofed U.K. government debt, for example. Today, British pension funds hold a fraction of the equities they did 30 years ago, preferring instead to match their liabilities with the predictable cash flows of government and corporate bonds.

BOE officials worry that this “de-risking” is bad for the economy, depriving promising companies of a valuable source of long-term equity investment. It also means there are fewer buyers around for cheap stocks when markets take a tumble, once again fueling pro-cyclical moves in prices.

How might such pro-cyclical tendencies among insurers and pension funds be resisted? The paper stops short of listing explicit policy recommendations and instead ends with a call for further research and better data.

But officials note that insurers are subject to capital rules that could be tweaked depending on what’s happening in the economy, just like the rules for banks. Leaning against pro-cyclical behavior at a pension fund could involve relaxing rules that require funding shortfalls to be quickly filled.

New “macroprudential” regulatory policies designed to safeguard financial stability have so far been largely focused on banks. The paper highlights how central bankers and regulators envisage one day operating on other areas of finance, too.