Bogeyman or bogey?: There are better and worse arguments for keeping interest rates low 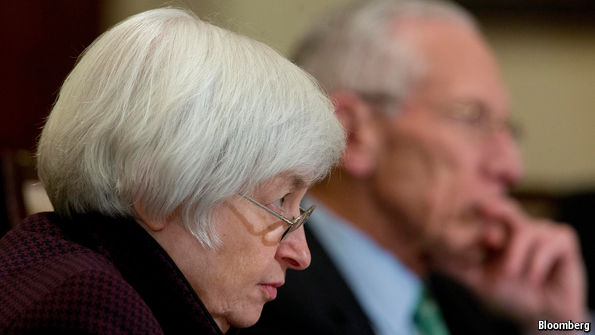 With the Federal Reserve set to raise interest rates in December, my colleague R.A. argues that:

Fed members argue that they are choosing to raise rates now, before inflation has returned to target, so that inflation will not jump above 2%, forcing them to raise rates in a much more rapid manner. If the choice is between above target inflation and a recession, the Fed will take the latter. They are prepared to risk keeping inflation from ever getting to target in the first place (and also a recession) by raising rates with inflation below 2%…

…recent experience has probably distorted central bankers’ perspective, and made them excessively quick to see inflation in the data and react to it 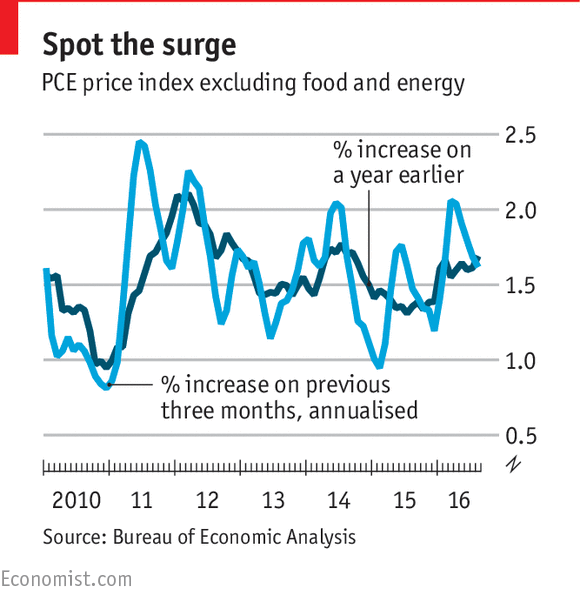 His criticism of the Fed combines multiple lines of argument. One is that central bankers are too keen to spot inflation in the data. That is probably right. Much has been made of a recent pick-up in core inflation. But it is not all that impressive. Prices excluding food and energy—the “core” measure that the Fed really cares about—are about 1.7% higher than a year ago. But when measured on a rolling three-monthly basis, inflation has been falling since the spring (see chart). The consumer price index, an alternative yardstick, tells a similar story. With inflation both below target and falling, tightening monetary-policy seems like a bad idea­—especially when you consider that household’s inflation expectations are sagging, too.

I find the rest of the argument less convincing. If monetary policy operates with a lag, it makes sense to raise rates before you hit the target, to prevent an overshoot. When doves reject this logic, they are implicitly criticizing the Fed’s 2% inflation target, not its strategy for achieving its goal. Perhaps we should have a price level target, which would compel the Fed to make up for its past mistakes. Perhaps the inflation target should be higher, in order to provide a greater cushion during the next recession. But, once the destination is agreed, the pilot must look forward if she is to the land the plane. Inflation targets do not call for making up for past mistakes, and central banks should try to do what they say they are trying to do. At the moment, that means 2% inflation—and no rear-view steering.

This also means that in an equal and opposite situation where the Fed must bring inflation down after an upward shock, it should loosen policy while inflation still exceeds 2%. I doubt that in such a mirror-image world many of today’s doves would call for the Fed to undershoot in order to “make up” for the period of above-target inflation. Why would they? Overshoots align with the doves’ real—and understandable—goal: a hotter labour market which drives employment and wages higher. Undershoots, by contrast, would cause pain in the labour market.

But running the economy a little hotter, getting just a bit more output without worrying about inflation, is the forbidden fruit of monetary policy. Rate-setters must resist its temptations, because if they succumb, they will end up with higher inflation and no extra jobs to show for it. This problem, called “inflation bias”, is one reason why we have independent central banks in the first place. It is why we should be glad that the Fed will do what it takes to achieve its inflation target; that it will, as R.A notes, create a recession when that is what is necessary. The anchoring of inflation-expectations depends on that commitment.

It is easy to dismiss these points as academic, given that inflation has been below target for too long. At present, the biggest threat to central bank credibility is clearly on the downside. But that does not mean that every argument for keeping rates low is a good one. When doves deny the logic of changing policy in advance of achieving the inflation target, they overreach. The data show plenty to be dovish about: softening core inflation in the short-term, and falling household inflation-expectations. Doves should simply point that out and, if they want a price level target, say as much. But when they include a dose of inflation bias, they are unconvincing.