Bogeymen: The only thing we have to fear is fear of inflation 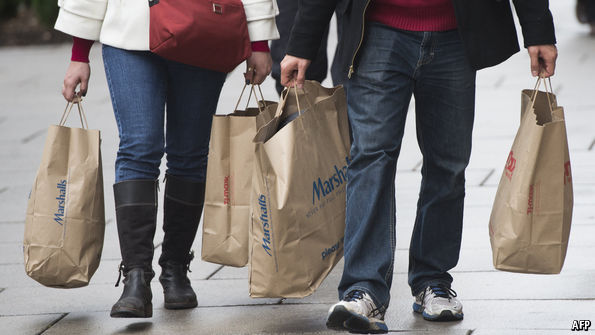 DON’T look now, but after years of lingering on the brink of (or in) deflation, rich economies are heading in a different direction. Inflation is rising, and a handful of economy watchers are worrying that accelerating price increases could “rattle global markets”, as Mike Bird of the Wall Street Journal writes:

Rich-country government-bond prices tumbled Thursday, sending yields up on both sides of the Atlantic to levels not seen since the U.K.’s vote to exit from the European Union in June. In the U.S., the yield on the 10-year U.S. Treasury note surged as high as 1.847%, according to Tradeweb, its highest level in four months. Yields rise as bond prices fall. The German bund’s yield rose about 0.07 percentage point to 0.161% and the 10-year U.K. gilt yield was up about 0.10 percentage point to 1.259%, according to Tradeweb.

The rising yields are the latest sign that investors are bracing for what could be an epic shift across markets. In recent years, falling commodities, meager wage rises and insipid economic growth kept prices low and pushed investors into assets such as long-dated bonds and high dividend paying stocks, that typically do better during periods of muted inflation. But now inflation is ticking up again and these markets are coming under pressure.

Mr Bird is not the only one to call attention to these developments. But just what do they portend?

That isn’t perfectly clear. Some economists reckon a sustained rise in inflation is overdue. Most of the rich world is out of recession, emerging markets seem to have put the worst of their commodity bust behind them, and in a few places, like America, low unemployment has at last given way to accelerating wage growth. It is possible, some suppose, that the weak growth and sustained disinflation of the past half-decade has blinded markets and policy-makers to the potential for a sharp swing in the other direction, toward uncomfortably high inflation.

That, it seems to me, is unlikely. First, the recent uptick in inflation is in part a rebound from the extraordinarily low inflation of the past couple of years. As Mr Bird notes, “2015 was the first year since 1932 in which inflation fell below 2% in each of the Group of Seven industrialised economies”. From 2013 until early this year, commodity prices plummeted, dragging headline inflation into negative territory across much of the rich world. Prices could not fall in such a fashion forever. As they have stabilised, inflation measures have moved back into positive territory.

Second, the data have not actually moved by all that much. Growth in America’s CPI was 1.5% in September, or back to where it was in late 2014. Treasury yields are climbing, but only back to where they were in the spring; the same is true for most market measures of inflation expectations. The world has climbed back toward conditions it last faced a year or two ago. Those conditions, it is worth remembering, were not that great. The fact that America is more than seven years into an expansion, with unemployment at 5%, and both the 10-year Treasury yield and inflation are below 2% is remarkable.

But the main reason not to expect rapid inflation is that, sadly, central banks do not seem especially interested in allowing it to develop. At the moment, for instance, markets expect the Fed to raise interest rates for a second time in December. It is very unlikely that the Fed’s preferred inflation measure will have risen back to the 2% target by then (in August, it stood at 1%). Indeed, Fed members argue that they are choosing to raise rates now, before inflation has returned to target, so that inflation will not jump above 2%, forcing them to raise rates in a much more rapid manner. If the choice is between above target inflation and a recession, the Fed will take the latter. They are prepared to risk keeping inflation from ever getting to target in the first place (and also a recession) by raising rates with inflation below 2%.

The big threat, I would say, is not that recent, low inflation figures have made central banks complacent about the threat of accelerating price increases. Rather, recent experience has probably distorted central bankers’ perspective, and made them excessively quick to see inflation in the data and react to it. Inflation rates have been historically low over the course of this recovery. In America average inflation, as captured in the price index for personal consumption expenditures (the Fed’s preferred gauge) from 1990 to 2010, was 2.2%. For America to average 2.2% inflation across the whole of the 2010s, the economy would need for inflation to run at 3.8% from now until the end of the decade. And keep in mind: two decades of inflation at 2.2% failed to leave the Fed with enough of an interest-rate cushion to keep America from stumbling into the zero-interest-rate rut that has held the country trapped since 2008.

It has been reckless of the Fed to allow inflation to remain so low for so long. We should be cheering the slight, recent acceleration in prices and hoping for more. Unfortunately, the Fed is unlikely to indulge us.