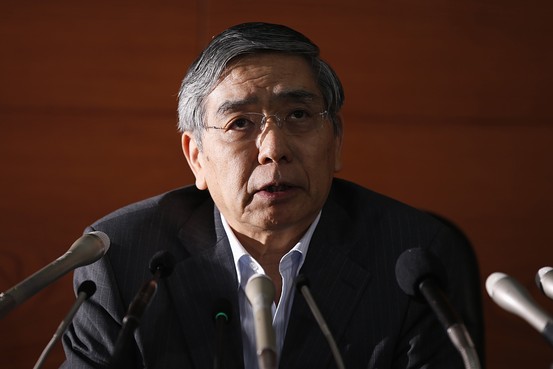 Bank of Japan Gov. Haruhiko Kuroda speaks during a news conference at BOJ headquarters in Tokyo on May 21, 2014.
Reuters

Famously conservative, Japanese bureaucrats and policy makers are normally reluctant to speak out about the policy mistakes of their predecessors. That is because such comments can raise concerns about a public loss of trust, and undermine the credibility policy-making institutions.

At a conference of academics and central bankers in Jordan on Saturday, Mr. Kuroda said the BOJ’s 2006 decision to lift its easing program was “somewhat premature.” He was referring to the quantitative easing adopted under then governor Toshihiko Fukui.

The measure, known as QE, was the precedent for unconventional monetary policies later employed by the U.S. Federal Reserve and the Bank of England amid near-zero interest rates.

Mr. Kuroda went on to say that even though the end to the easing was the result of in-dept discussions inside the central bank about the economy and inflation, it ended up becoming a reason why the BOJ has been unable to gain full credibility as a deflation fighter.

His comments suggest the BOJ will be in no rush to consider an exit to its current policy.

The blunt remarks about the institution he now heads are surprising. Other BOJ board members and career officials don’t normally touch on the negative aspects of past policies.

It isn’t the first time Mr. Kuroda has cast aspersions on past policy decisions. In March, he told business leaders that past central bank monetary policies had been successful in smoothing out ups and downs in the economy, but not sufficient to prevent deflation from taking root.

Breaking from the cautious, step-by-step approach of his predecessor Masaaki Shirakawa, Mr. Kuroda introduced an unprecedented stimulus program in April 2013. It appears to have paid off, as the latest inflation rate has risen to 1.5% from minus 0.5% in March last year.

Mr. Kuroda doesn’t seem to be just trying to bash his predecessors, but to figure out the right move by reflecting on past actions in which he wasn’t involved.

His bullish remarks on inflation and the economic outlook in recent months have reduced market expectations for imminent, additional easing.

But Mr. Kuroda probably still needs to figure out how to lock in expectations among households and businesses that 2.0% inflation will become a reality, the BOJ’s most difficult challenge, people familiar with the BOJ’s thinking say.

“That’s why Mr. Kuroda has been saying the central bank is halfway toward achieving stable 2.0% inflation,” one of the people said.

In his speech Saturday, Mr. Kuroda called for the conference participants to come out with a clearer framework for understanding the workings and effects of unconventional policies.

He said that while expectations play an important role in unconventional monetary policy, the development of a theoretical understanding of this role has been “lagging.”

“We do not have established theories that explain how inflation expectations can be raised (in a near-zero inflation environment) and that suggest feasible policy measures to achieve this,” he said.