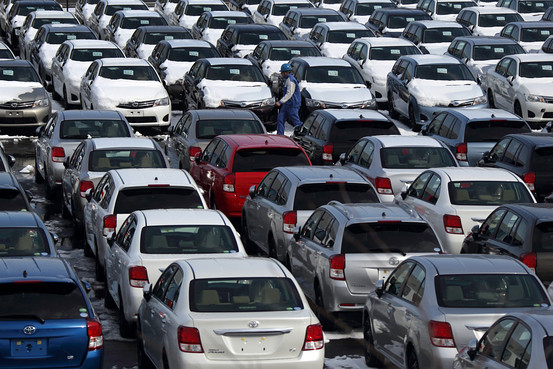 With Japanese exports showing little sign of life despite a weaker yen and a rebounding U.S. economy, Bank of Japan officials are growing concerned they have underestimated the impact of the country’s industrial hollowing-out–particularly in the auto industry.

Auto exports are barely rising more than a year after the central bank caused the yen’s value to fall 20% against the dollar through monetary easing. That was supposed to reduce the prices of Japan-made goods and make them more competitive overseas. But according to data from the Ministry of Finance, the volume of auto shipments to overseas fell in four of the first six months of this year.

One reason is that car makers have already shifted a large portion of their supply chains to overseas markets, where the prospects of growth and demand for autos are generally brighter than in Japan. In the January-March period, Japanese manufacturers produced nearly two of three cars at overseas factories, according to the Japan Automobile Manufacturers Association.

BOJ officials have “a bit underestimated the effects of production shift by auto makers,” a person close to the central bank said. He pointed to the opening of new plants in Mexico earlier this year by Honda Motor Co. and Mazda Motor Corp.

Autos aren’t the only sector showing sluggishness. Exports of consumer electronics, steel and ships were all down in the January-June period. But with autos accounting for roughly 15% of what Japan earns through merchandise exports, their lackluster performance concerns policy-makers, especially as the economy copes with the hangover from a rise in the domestic sales tax in April.

The shift of factories overseas accelerated across corporate Japan, particularly in the wake of the global financial crisis that peaked in 2008, sending the yen to all-time highs.

In the first half of this year, Toyota Motor Corp., the world’s largest auto maker by volume, produced 4.5 million vehicles around the world, according to company data. About 63% were made outside Japan. That was a far higher ratio than the approximately 50% in 2007.

At Nissan Motor Co., Japan’s No. 2 auto maker, overseas production accounted for 83% of total global auto output in the January-June period, up from 66% from 2007, according to the company’s website. The foreign production ratio of the No. 3 Japanese auto maker, Honda Motor Co., came to 77% in the same period, compared with 66% in 2007, according to the company website.

Mitsubishi Motors Corp. produced 48% of its vehicles overseas in the first half of the year, up from 40% before the financial turmoil, the firm’s website says.

Mazda’s foreign output ratio was much lower, at 24%, little-changed since 2007, but its increased manufacturing in Mexico is something BOJ officials have noted.

“Continued movement, mainly by Japanese auto makers, to expand their overseas production through this year may be exerting downward pressure on exports, with a time lag,” BOJ policy-board member Takahide Kiuchi said in a recent speech.