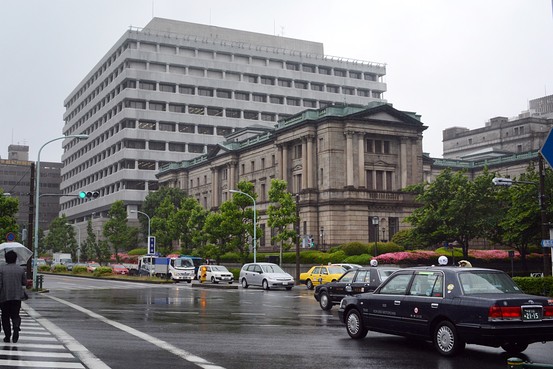 The Bank of Japan headquarters in Tokyo in late May.
Agence France-Presse/Getty Images

Encouraged by bright signs in the U.S. and developing countries, the Bank of Japan is considering upgrading its assessment of overseas economies at a planned policy meeting later this week, according to people familiar with the central bank’s thinking.

“It seems as though the prospects for overseas economies are gradually improving,” one of the people said.

A close reading of the tone of the BOJ’s monthly assessment removes much of the mystery over how inclined the central bank is to step up its monetary easing program. The BOJ is already pumping trillions of yen every month into the economy and if it signals that both the domestic and overseas economies are going great guns that makes it more plausible that it won’t take further action anytime soon.

At a policy meeting scheduled for Thursday and Friday, the BOJ is widely expected to stand pat on monetary policy and maintain its upbeat assessment of the overall economy. But in its sector-by-sector analysis, the people said the bank may change its description of foreign economies, which now states: “Overseas economies–mainly advanced economies–are starting to recover, although a lackluster performance is still seen in part.”

Since the BOJ launched its current easing program in April last year, officials have almost every month predicted that foreign demand and Japanese exports would bounce back—only to be disappointed when the actual data came out. But this time may be different, the people said, noting that while it could take time before exports accelerate, U.S. economic indicators are pointing to an improvement overseas.

U.S. auto sales surged 11% in May, while non-farm payrolls advanced a seasonally adjusted 217,000. BOJ officials have interpreted the data to mean that the U.S. economy has pulled out of a slump caused by an unusually cold winter, the people said.

The BOJ is attaching overriding importance to the U.S. recovery, giving less weight to troubling signs elsewhere, such as too-low-inflation in Europe, political unrest in Thailand and tensions over Ukraine, they also said.

That’s because the U.S. is one of the two largest overseas markets for Japanese manufacturers, along with China, importing nearly 20% of their exports. A U.S. recovery also tends to boost growth in other major buyers of Japanese products, the people said, pointing to the improving export performances of South Korea and Taiwan.

BOJ officials have also been encouraged by positive signs in some other emerging nations, such as in Indonesia, which has seen an influx of investment thanks to healthy growth and budding economic overhauls, the people said.

To be sure, optimism is spreading among BOJ officials that even if Japanese exports remain in a soft spot, the economy won’t buckle under the weight of a domestic sales tax increase that kicked in April 1. They have taken a surprisingly strong 34% surge in capital investment in the first quarter as a sign that domestic demand is becoming more muscular, the people said.

But without gains in exports, “it could be difficult for the economy to expand at the rate predicted” by the BOJ, one of the people said, referring to the 1.1% real growth the bank currently expects for the fiscal year ending March 2015. Exports account for roughly 15% of Japan’s annual economic output. “The economy could struggle to gain momentum unless exports grow, stimulating manufacturing activity.”