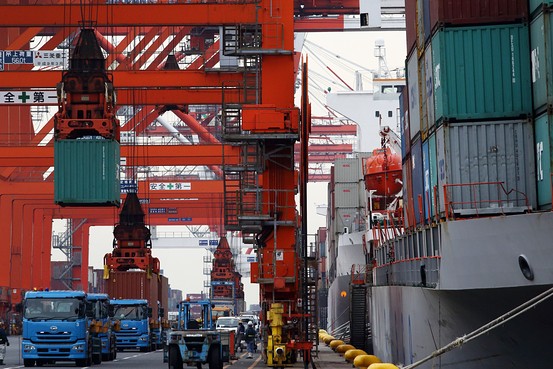 Gantry cranes move containers from trucks and container ships at a shipping terminal in Tokyo on Nov.11, 2014.
Bloomberg News

The Bank of Japan is likely to upgrade its view of exports when its policy board meets next week, as an economic recovery in the U.S. and other regions fuels demand for Japanese products, people familiar with the BOJ’s thinking said.

Over the past year, the central bank has counted on a recovery in exports to partially make up for a drop-off in demand after the increase in sales tax that took effect in April.

But such hopes have given way to disappointment amid slow growth in the global economy, with Japan’s own economy — the world’s third-biggest — slipping into recession, prompting Prime Minister Shinzo Abe to postpone another sales-tax rise by 18 months.

Still, with faltering consumer sentiment at home, help from overseas demand would be an encouraging development for the BOJ to maintain its overall assessment that the economy is in “a moderate recovery.”

The central bank is expected to keep its key policy unchanged at its two-day policy meeting Dec. 18-19 to gauge the effects of the additional action it took on Oct 31, BOJ watchers say.

In its monetary policy statement last month, the BOJ said exports have been “flat.”

One of the people said that “rather than being flat, the situation is turning for the better,” with exports bound for the U.S. and some Asian nations and the Middle East gaining traction.

According to figures adjusted for inflation by the BOJ, exports grew 3.7% in October from a month earlier, the second consecutive monthly gain. Finance Ministry data also show exports rose 7.3% from a year earlier in the first 20 days of November on an unadjusted basis, indicating a continuing pick-up in exports last month.

“The recovery in the U.S. economy is having a ripple effect on Asian nations as well as Japan’s production,” another one of the people said. “Inventory adjustment here in the auto sector is also progressing.”

BOJ officials, however, aren’t overly optimistic about exports, which have disappointed before, especially given the uneven global picture with Europe still suffering from anemic growth and low inflation, the people say.

They also cite concerns about the recent rapid falls in the yen, even though they mostly share Gov. Haruhiko Kuroda’s view that a weaker-yen trend is a plus for the overall economy. About a month after the latest easing step, the yen had declined more than 10% against the dollar before its recent pullback.

“It’s rapid,” said one person, adding that such moves can destabilize the currency market, making it difficult for firms to lay out business plans.

A sign of caution was apparent in a change in Mr. Kuroda’s rhetoric late last month. Speaking in Nagoya, western Japan, asked if he maintained his view on a weaker yen, Mr. Kuroda said only, “There’s no change in my thinking.” He didn’t restate his mantra that the positive effects on the overall economy outweigh the negatives as a whole.