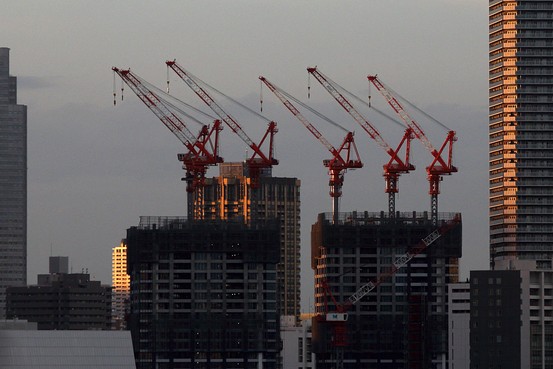 Cranes operate on buildings under construction in Tokyo. The Bank of Japan downgraded its view on the housing sector on Thursday.
Bloomberg News

The Bank of Japan on Thursday may have looked optimistic in its first update on the economy since the release of grim data over the past few weeks, but details of its assessment suggest some renewed cautiousness among policy makers.

The central bank’s latest policy meeting took place amid growing pessimism among private economists that a sales tax increase in April may have put Prime Minister Shinzo Abe’s growth-revival plan at risk. Data out ahead of the meeting showed that Japan’s economy shrank at the sharpest rate since the March 2011 earthquake in the quarter through June, and that it is struggling to regain steam in July.

A quick look at a statement issued by the BOJ suggests that officials aren’t worried. They simply recycled the wording on the overall economic assessment from the previous month. The Japanese economy “has continued to recovery moderately as a trend” despite a pullback in demand following the increase in the sales tax to 8% from 5%, it said.

But there are slight changes in the statement that may warrant attention. The clearest one is that the central bank cut its view on housing investment. Housing starts fell 14.1% in July, worse than in June and the fifth straight month of declines, suggesting the economy has yet to overcome the hangover from the tax change.

What the central bank didn’t say may also be as important as what it did say.

Ahead of the policy meeting, some officials had an idea that if July industrial output data showed good numbers, they should reword the main assessment language to note that the effects of the tax increase were fading, according to people familiar with the matter.
But officials apparently gave up on that intention after industrial production rose only 0.2% in July. Private economists saw it as surprisingly weak, coming after an unusually sharp drop of 3.4% the previous month.

In a sign that officials took note of the discouraging data, the BOJ made a subtle change to the wording on production—in the Japanese version of its statement.

In the previous August statement, the Japanese version said industrial output “is showing some signs of weakness, but it continues to increase moderately as a trend.” The latest one reversed that order, saying output “continues to increase as a trend, but it is showing signs of weakness.” While this is hardly a material change, in Japanese, saying good things first, bad things second often suggests the emphasis is on the latter part.

BOJ Gov. Haruhiko Kuroda is set to elaborate on the central bank’s views on the economy at a news conference later Thursday.