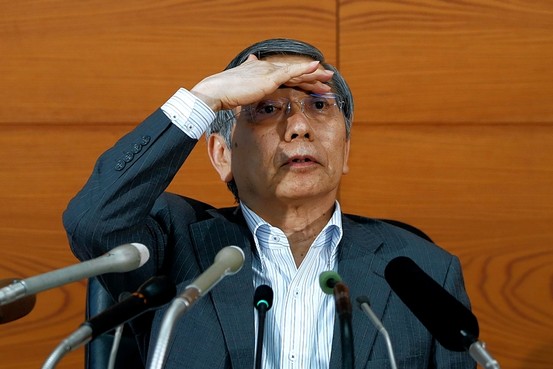 The Bank of Japan , under Gov. Haruhiko Kuroda, is already considering how eventually to end its quantitative easing program.
Bloomberg

Like the Federal Reserve, which found that ending its extraordinary support for the U.S. economy required patient planning and careful communication, the Bank of Japan is already preparing for the Day After.

An opposition lawmaker grilled Bank of Japan Gov. Haruhiko Kuroda at Parliament on Thursday, arguing that the central bank won’t find it easy to terminate its quantitative easing policy. On Friday, two senior BOJ officials issued an article saying there are plenty of tools they can use when it’s time to pull the plug on the bond-buying program.

“One thing for sure is that [the BOJ] has a variety of tools and there are many ways to exit,” Kazuo Momma, an executive director at the central bank, and senior BOJ official Shuji Kobayakawa say in their lengthy paper.

Among them: letting Japanese government bonds that the BOJ holds mature without rolling them over; and lifting interest rates on excess reserves parked at the central bank.

Such proposals have been widely discussed among academics, but it’s rare for BOJ officials to mention specific steps.

Mr. Kuroda has declined to talk specifics, saying it’s too early to debate an exit strategy since the central bank is only halfway to achieving its 2.0% inflation target.

Messrs. Momma and Kobayakawa said the choice and sequencing of exit tools will depend on developments in the economy, prices and financial markets when the bank is ready to exit.

The article was published on the BOJ’s website a day after Mikishi Daimon, a veteran legislator from the Communist Party, told Mr. Kuroda in a parliamentary debate that the BOJ’s massive easing since April 2013 has entered “a dangerous phase” and has no clear end-game.

Mr. Daimon said the BOJ risks “falling into a trap set by itself” through its massive purchases of government bonds.

He claimed the BOJ must now keep buying government bonds to prevent yields from spiking, something the Finance Ministry desperately wants to avoid due to Japan’s heavy debt burden.

Messrs. Momma and Kobayakawa say the BOJ has made substantial progress toward overcoming the deflation that has hobbled Japan’s economy for nearly 15 years. But they acknowledge that there are still challenges ahead and say the central bank will continue to work diligently to eliminate deflation.

They said the BOJ will continue to do “whatever it can” to achieve its 2.0% inflation target, suggesting the bank will take additional easing measures if the economy begins to lose momentum.