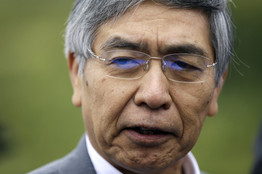 Bank of Japan Governor Haruhiko Kuroda speaks with the media during the Jackson Hole Economic Policy Symposium at the Jackson Lake Lodge on Friday.
AP

The Bank of Japan is sticking to its expectation of an improving domestic economy and gradually rising inflation fueled by its current policies, despite growing skepticism among private analysts about the health of the recovery and the adequacy of the central bank’s efforts.

“We at the Bank of Japan do not think it is necessary to change our economic forecast for coming years,” Gov. Haruhiko Kuroda told reporters Friday on the sidelines of the Kansas City Fed’s conference in Jackson Hole, Wyo., even though exports have stalled of late and the economy stumbled more than expected in the second quarter after the introduction of consumption taxes.

Mr. Kuroda also said he felt that, at this point, the aggressive stimulus program launched shortly after he took over in April 2013 was sufficient, even as many investors expect the central bank to expand its campaign later this year.

“We will continue our current monetary policy, but if there is anything which could derail our course toward 2% inflation target we would not hesitate to change or adjust our monetary policy,” he said.

Mr. Kuroda’s comments underscore what appears to be a growing gulf between the BOJ and private-sector economists, who have long been skeptical about his ability to end Japan’s long bout of deflation in just two years – and who in recent weeks have grown increasingly skeptical about his success in pumping up growth as well.

The Bank of Japan is forecasting gross domestic product growth, adjusted for prices, to hit 1.0% for the current fiscal year ending March 31, 2015. But in recent weeks, a string of weaker-than-expected data has prompted private economists to mark down their forecasts – and to predict the BOJ would be forced to as well.

A Jiji news survey of 11 think tanks released this week said the forecasters, on average, see growth of just 0.5% for the same period. Goldman Sachs this month cut its forecast to 0.4%, saying “we expect the recovery to be relatively weak because of (1) a steep drop in real disposable income, and (2) the… buildup of inventories.”

Mr. Kuroda said that one reason for his optimism was an expectation that Japan’s exports would finally start to increase in coming months. One of the mysteries of the past year been the continued weakness in Japan’s exports, despite the sharp drop in the value of the yen, which lowers the price of Japanese goods on global markets.

“The world economy is recovering and increasing its growth,” Mr. Kuroda said, pointing to estimates of faster growth from bodies such as the International Monetary Fund and World Bank. “Given this good prospect of the world economy we expect Japan’s exports gradually to catch up.”

In a statement released after the end of a two-day policy-setting meeting earlier this month, the Bank of Japan said exports “have shown some weakness,” a downward revision of the previously view that they were basically flat.

Japan’s economy contracted at a 6.8% annual rate in the second quarter after rising at a 6.1% rate in the first.

Mr. Kuroda maintained an upbeat view, repeating his view that domestic demand in Japan is now rising, supported by a self-reinforcing virtuous circle of consumer and corporate spending.

“We still think underlying trend of consumption is relatively robust because employment income continued to increase, reflecting a strong employment situation, as well as increasing nominal wages,” he said. “Second, corporate profits situation continues to be quite good. So that the corporate sector has very robust strong investment plans for this year and investment is increasing.”