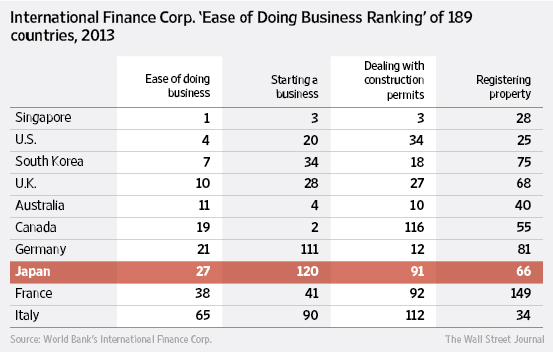 Many parts of Prime Minister Shinzo Abe’s new growth strategy will be difficult to implement. That’s why he has called himself a “drill bit” poised to “break through the solid rock of vested interests.” It’s why some of the most significant proposals were, to mix metaphors, watered down before announcement. If it were easy to remove the impediments to Japanese growth, it would have been done long ago.

But there are actually a number of quick bureaucratic reforms the government could enact that could make a big difference for Japanese commerce. For example, “elimination of the requirement for company seal and judicial scrivener to complete the registration procedure” to start a new business “can be done without changing any existing law,” says a new working paper from Stanford University’s Japan Studies Program. “Moreover, these reforms are not likely to face much political resistance because the benefactors of the regulations (seal makers and judicial scriveners in this example) are not known for their political clout.”

The study, by economists Jamal Ibrahim Haidar of the Paris School of Economics and Takeo Hoshi of Stanford, offers a detailed examination of one part of Mr. Abe’s program: a pledge to boost Japan’s position in the World Bank’s “Doing Business Ranking,” which assesses the “ease of doing business” in various countries around the world. Japan currently ranks 15th among 31 high-income countries in the Organization for Economic Cooperation and Development. Mr. Abe’s goal is to hit the top three by 2020. The authors identify 27 changes, mainly fairly narrow, that could get him there.

“By just doing the reforms that do not require legal changes and are not likely to face strong political opposition, Japan can improve the ranking to 9th,” the authors write, moving past Estonia, Germany, and Iceland, among others. They put 15 rule modifications in that category. Adding two more changes that do require changes to laws — and thus a bit more effort — but also face little resistance could lift Japan to number four, behind just New Zealand, the U.S., and Denmark. The authors say Mr. Abe would have to push through the 10 rule changes that are likely to face strong opposition to get into the top three. (Their analysis assumes the other countries don’t change their own rules to raise their rankings).

For students of Japan’s business regulatory culture, the Stanford study offers a wonderful array of examples of just how nettlesome the country’s rules can be. Japan ranks 28th out of the 31 OECD economies for “ease of starting a business.” In New Zealand, it takes one procedure and half a day to start a new company; in Australia, three procedures and four days. For Japan, “the process takes eight procedures and 22 days,” they write. Those include the requirement for a company seal — first carved, then certified at the ward office, then registered with the Justice Ministry. The company then has to submit paperwork, including the “certification of seal registration” to the local Legal Affairs Bureau. After approval, the company formally applies for a “company registration certificate,” generally handled by a “judicial scrivener.”

Messrs. Haidar and Hoshi propose eliminating the requirement for a seal, unique to Japan, and making business registration administrative instead of judicial, a change, they say, that has been made in recent years in countries like Serbia, Uganda, Bulgaria, and Honduras.

They also propose streamlining the process for building a warehouse in Japan, which currently takes 14 steps and 193 days, vs. 29 days in South Korea. Once the warehouse is built, it takes 105 days to hook electricity up, vs. 17 days in Germany, and 22 in South Korea. It takes six procedures and 13 days to register property in Japan. “More than 30 countries made it easier to register property since 2006,” the authors write. “Japan was not one of them.”

Mr. Abe has prominently pushed to reduce the corporate tax rate, which is currently second highest, after the U.S., in the OECD. But just the process of paying taxes may be as stifling as the amount. Japan ranks 31 out of 31 on the index of “time and cost associated with paying all taxes,” as companies make on average 14 tax payments a year, and spend “330 hours a year preparing, filing, and paying taxes.”

Mr. Abe first set the goal of raising Japan’s standing in the World Bank index in last year’s growth strategy. In this year’s version, the government reports modest progress in cutting the time required to start a new business or register real estate. But it notes no improvement in most areas, and no change in Japan’s overall ranking — despite the relative ease of doing so.