Boy Who Got Unapproved Drug Heads Home to Virginia

Josh Hardy, the boy whose parents successfully fought to get him an unapproved drug to save his life last March, is heading home to Virginia after spending months living in Tennessee to be near St. Jude’s Children’s Hospital.

“Glory to GOD!” his mother, Aimee Hardy, wrote on the Save Josh Facebook page. “We are going home!!!! Leaving today. After 6 1/2 months, Josh finally gets to be in his house.” 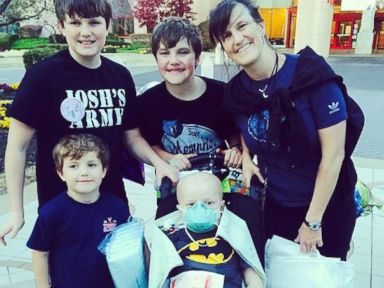 PHOTO: A photo of Josh Hardy and his family, after his release from the hospital

Hardy, 8, has beaten cancer four times, his parents said. But the treatments left his immune system so weak that a common virus became life-threatening.

The Hardy family said that their best hope for Josh’s survival was an unapproved antiviral drug called brincidofovir, but the company that makes the drug at first refused to give it to him. The Hardys started several online petitions to change the company’s mind.

“Having survived four diagnoses of cancer, it would be an absolute travesty for him to meet his demise from a virus,” mom Aimee Hardy told ABCNews.com in March. “Especially knowing there is a medicine in someone’s hands that can rid of this virus.” 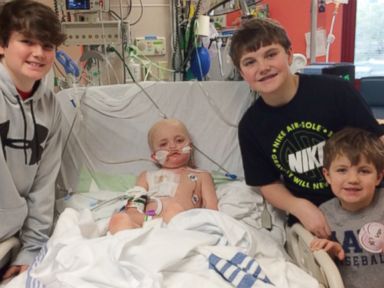 PHOTO: Josh Hardy, 7, has beat cancer four times, but a virus could kill him.

Family Petitions For Unapproved Drug To Save Son

Dying Boy to Get Unapproved Drug After Family’s Plea

Josh received his first cancer diagnosis when he was just a baby: Aggressive rhabdoid tumors in both kidneys, Hardy said. He went through surgery, chemotherapy and radiation, but the cancer returned in his thalamus gland and then his lung.

Then, after nearly four years of being cancer-free, Josh received bad news in November 2013, Hardy said. He had myelodysplastic syndrome, the same precancerous bone marrow disorder that ABC News anchor Robin Roberts was diagnosed with in 2012. It can be caused by cancer treatments.

Josh underwent a bone marrow transplant to remedy the disorder, but he developed graft-versus-host disease, meaning the new immune cells started to attack his body, Hardy said. “He was in complete heart failure and kidney failure and went into the ICU on January 14,” Hardy said.

To stop the attack, Josh’s doctors at St. Jude Children’s Hospital in Tennessee suppressed his immune system with drugs, allowing his heart and kidneys to start healing. But with a weakened immune system, Josh came down with adenovirus, a common virus that causes colds but can also be much more serious, Hardy said.

In Josh’s case, reawakening his immune system to fight the virus could bring back his graft versus host disease, so doctors gave him an antiviral medicine to get rid of the adenovirus. But the drug was toxic to his kidneys and wasn’t working, Hardy said.

“He’s at a physical standstill,” Hardy said at the time.

That was when Josh’s doctor at St. Jude suggested brincidofovir, a drug that researchers at Chimerix, a small North Carolina drug company, have been developing for the past 14 years. St. Jude had been involved in a clinical trial of brincidofovir in which children who had undergone bone marrow transplants and had early adenovirus infections took the drug and were able to decrease the amount of virus in their bodies.