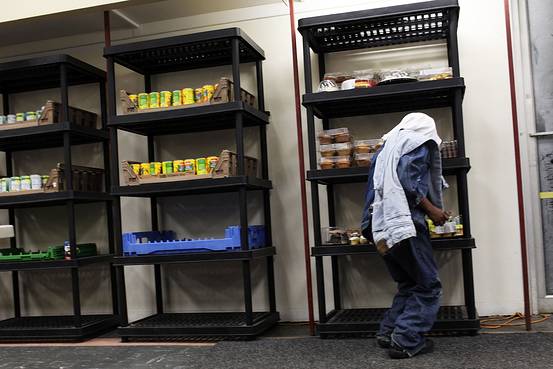 A child shops at a food bank in Utica, N.Y. Boys who grow up poverty work significantly less than girls, according to a new paper led by Stanford economist Raj Chetty.
SPENCER PLATT/GETTY IMAGES

Boys born into poverty are more likely to spiral into joblessness and crime than girls, according to a study highlighting the particularly egregious effects of childhood disadvantage on men.

A new paper led by Stanford economist Raj Chetty and Harvard’s Nathaniel Hendren finds boys in the bottom quintile of the income distribution are less likely to work than girls, especially when raised by single parents.

The findings are a surprising upending of the entrenched premise that the gender pay gap disadvantages women. Overall, women are less likely to be employed than men for a variety of reasons, and earlier economic research has studied factors ranging from occupational preferences to fertility patterns and discrimination. The labor-force participation rate for women over age 20 was 58.2 in December, far lower than 71.5 for men, according to Labor Department data. Nor are women equally compensated: nationwide, women working full time only earn about 79% of what men make.

But boys who grow up in high-poverty, high-minority, crime-stricken areas work significantly less than girls, according to the National Bureau of Economic Research working paper, which examines the tax records of some 10 million Americans born between 1980 and 1982.

Mr. Chetty’s previous research on upward mobility has looked at economic inequality based on location, and he has proposed helping families move away from bad neighborhoods and bad teachers for a shot at entering the middle class. The economist has advised both Republican and Democratic lawmakers, including former Florida Gov. Jeb Bush, former Secretary of State Hillary Clinton and President Barack Obama’s White House.

His latest paper, co-authored Hendren, Frina Lin, Jeremy Majerovitz, and Benjamin Scuderi, provides new fodder for the thesis that children’s outcomes in adulthood vary substantially depending on whether they grow up in poor neighborhoods. The researchers focus on 100 populous counties and commuting zones, which are aggregations based on commuting patterns that define local labor markets. 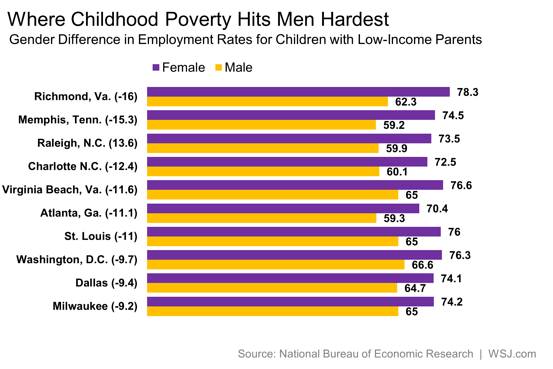 One question no one has yet conclusively answered is why boys are more vulnerable than girls to the effects of childhood poverty.

But the paper questions the decline in male labor-force participation rates in the U.S., which policy makers often attribute to demographic factors like the aging population, globalization and technological disruption.

The researchers’ findings “suggest that part of the explanation may instead lie in the growth of residential segregation, income inequality, and the fraction of children raised in single-parent households—all factors associated with lower employment rates for boys relative to girls.”

Men raised in low-income families do worse than women in on other measures, too, such as college attendance. One potential explanation for the study’s findings, the authors say, “is that growing up in poverty may induce low-ability boys to switch from formal employment to crime or other illicit activities, perhaps because of lower perceived returns to work.”

Poverty is an issue shaping the 2016 presidential campaign, and both Democratic and Republican presidential frontrunners have discussed ways to reduce income inequality between rich and poor Americans.

Mobility Is More Important Than Ever, and Here’s Who’s Missing Out

How Much Do Neighborhoods Influence Future Earnings?

Two in Every Five U.S. Children Spend at Least a Year in Poverty