The night before we spoke, Bridget Christie won Red Magazine’s Woman of the Year Award. She talks of a pleasant evening, inspired from meeting the others on what is a diverse shortlist.

On the phone to Londonist though, last night must seem a lifetime ago: Christie is waiting at a bus stop reading out the graffiti on vehicles speeding past her.

“A white van has just gone by,” she says, “I can’t make all the words out — but, it says ‘something, something slags’.”

From the surface of filthy white vans, to cleanliness of a hospital theatre, sexism manifests in myriad ways, says the comedian:

“Jyoti Shah spoke out,” Christie says, about a recent interview from one of the country’s leading surgeons and editor of Medical Women Magazine: “Female surgeons are about to operate when they get asked to make the tea… or they get their breasts brushed by someone’s hand. This is when they are about to operate, and they have to deal with this stuff.”

In 2013, Christie won the most coveted prize in comedy — the main Edinburgh award — for A Bic for Her, a show titled after the famous pen manufacturers’ ludicrous idea to market some ballpoints on a gendered basis. It nicely captures Christie’s ability to articulate the absurd reach and foolishness of sexism, which then forges her the comedic path to covering outright misogyny and those women in countries trapped and denied freedom of speech: “As a comedian everything I say has to be funny and if I can’t say something funny it can’t go in. Otherwise, I’d be a lecturer or politician.”

It’s a balance that requires an enormous amount of skill, and was rewarded not just in Christie’s Edinburgh award, but that the show soon broke the box office record at Soho Theatre.

It’s usually suggested that success and recognition — at least in terms of awards — followed a marked change in direction for Christie, from characterful comedy and surrealism to feminist and topical comedy. It’s not an unreasonable claim. After all, before her win, Christie performed on stage as King Charles II, bestseller Dan Brown and, perhaps most memorable, dressed as an ant struggling in a world where people could only see the ant rather than a comedian.

Today, the barriers for those starting in comedy extend beyond the ones which hamper ants: “I wouldn’t be able to start in stand-up now. I couldn’t afford to come to London to do the gigs. And, I’d be too self-conscious because everyone records you. It’s really intimidating, Chris Rock spoke about this recently, it makes you feel paranoid and that you can’t take risks because everything is being recorded.” 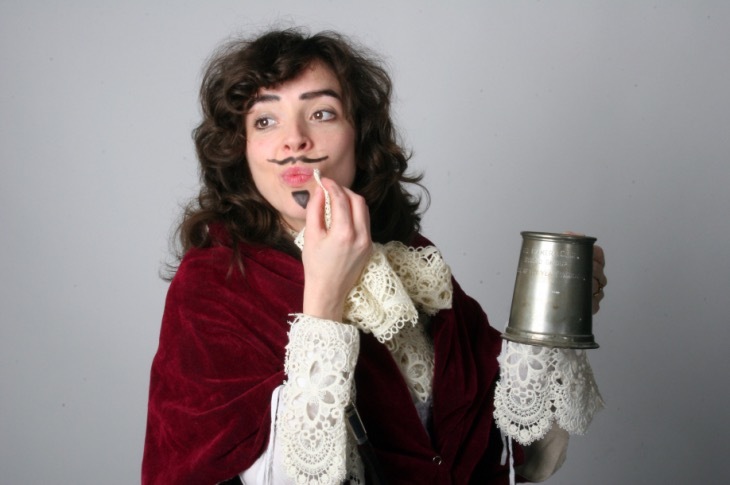 But the comedy scene is improving too.

“In the time that I’ve been doing stand-up,” Christie says, “which is 12 years, you’ve gone from people taking their toilet break, or going to the bar, or huffing and puffing, or crossing their arms [because a female comedian has walked on stage] to audiences willing to give you a go — which is very nice of them.”

What marks all of Christie’s shows from early in her career to her first book this year, and the show she now brings to Leicester Square Theatre, is a curiosity and fascination for history, one that she’s had since childhood:

“When we were little — I was the youngest of nine children — we had a Bedford van that we all got in every weekend. Mum and dad would take us round National Trust properties and stately homes and castles and would always talk to us about history. I always loved old things. I got all my clothes in charity shops, and I loved old houses — I didn’t like anything modern at all.”

For an artist, learning from the past can temporarily frustrate, but ultimately inspire:

“Most things have happened before. Most art has been created and most ideas have been thought. You might think you’ve come up with something original but then find it has been done in the 1920s or something, or in stand-up by one of the great American comedians. Even tiny things you might do have someone coming up and saying, ‘did you know so and so did…’ and you’ll be like ‘oh no! I thought I was original.’”

“Although once you accept you’re not original, you can have a bit more fun with it.”

A Book For Her is published by Random House and available now.