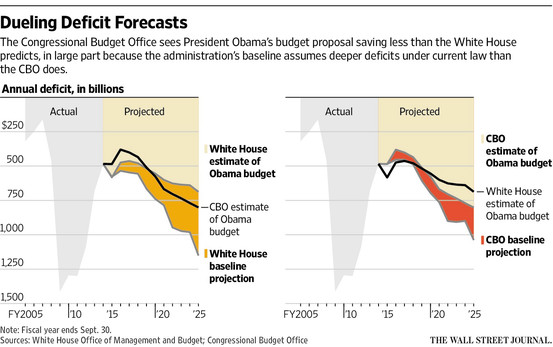 That is less than the $2.2 trillion in cuts forecast by the White House in its budget. (In public, the administration has said its proposal would reduce deficits by $1.8 trillion because the larger figure includes reductions in war spending.)

In the immediate future, the CBO actually sees the White House’s budget proposal providing greater deficit reduction than the White House expects. The budget score-keeping agency says tax receipts from several deductions that the administration would eliminate or cap would be responsible for the largest component of deficit reduction, aside from the drop in war funding.

Republican control of Congress means big battles loom this spring over how much money the government should collect and how it should be spent. Mr. Obama has called for an increase in spending above levels agreed to in law four years ago known as sequestration. Republicans are preparing to introduce budgets next week that would keep spending at sequester levels.

GOP to Stick to Sequester Spending Limits in 2016 Budget