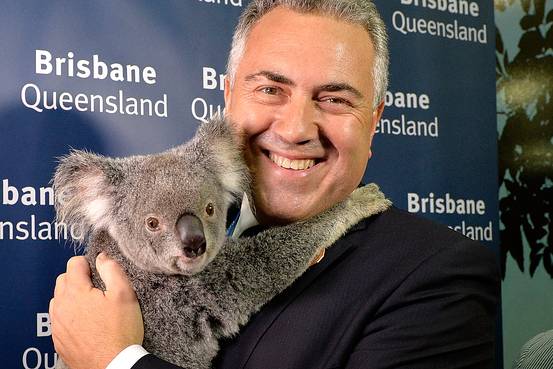 Treasurer Joe Hockey is preparing to hand down his second budget on May 12. Here, he is seen holding a Koala in Brisbane, Australia.
Getty Images

“The loss of Australia’s coveted triple-AAA sovereign rating is not imminent. But risks will grow without a change in trajectory,” said J.P. Morgan Chief Economist Stephen Walters in a prebudget research paper.

As Treasurer Joe Hockey prepares to hand down his second budget on May 12, he confronts the same headwinds that mired the last one in a year-long political row, and triggered a devastating fall in opinion-poll support.

Last year’s budget contained deep welfare-spending cuts and tax rises that embittered many voters. A number of the proposals have gotten stuck in the Senate, where Prime Minister Tony Abbott’s government lacks a clear majority to push them through.

Some economists estimate that plunging commodity prices could wipe as much as A$2 billion ($1.52 billion) from government revenue by the time the budget is presented. The price of iron ore, the nation’s biggest export, dropped below US$50 a ton on Wednesday, driven by worries over China’s economy.

“Tax revenues continue to undershoot expectations and expenditure growth has accelerated, not slowed, as the government promised,” said Mr. Walters. “Despite the government’s best efforts … fiscal policy is on the wrong track,” he added.

Jolted by a failed challenge to his leadership in February, Mr. Abbott has promised the latest budget would be “frugal and almost boring” compared with last year’s—which presented austerity measures aimed at putting the country on the path to a fiscal surplus following years in deficit under the former Labor government.

But some of the key measures remain bogged down in the upper house, where crossbench lawmakers present a wide spectrum of views on the economy: Some want even deeper spending cuts; others think the existing proposals go too far. Mr. Abbott’s conservative party will need their support for the budget to pass.

The conservative government has little room to move. On one side, it’s tugged by entrenched voter opposition to welfare cuts. On the other, businesses are clamoring for tax relief and reforms to make labor less expensive and more flexible.

Australia’s A$1.5 trillion economy is struggling to find alternate sources of growth after a decadelong mining-investment boom began fading in 2012. The central bank cut its benchmark interest rate earlier this to spur domestic spending.

Many economists expect the bank to cut further, with persistent unemployment, stagnant wages and slow growth. This week, Citigroup lowered its forecasts for GDP growth in 2015 this week to 2.5% from 3.0%, citing China’s slowing housing market, a big driver of demand for Australia’s commodities.