Business economists are skeptical that the Federal Reserve’s benchmark interest rate will top 1% by the end of next year as central bank officials project.

The poll of 46 professional forecasters by the National Association for Business Economics pegged the federal-funds rate target at 0.845% at the end of 2015. That reading is well below the median 1.25-to-1.50% range Fed officials themselves projected for the end of next year in forecasts released earlier this month.

The Fed funds rate has been pegged near zero since the end of 2008. To top 1% in the next 15 months, the Fed would need to act fairly aggressively after  the central bank moves to raise rates. Outside economists appear to betting on the central bank taking a more cautions path.

“It will be interesting to see who is right,” said John Silvia, chief economist at Wells Fargo & Co. and NABE president-elect. “The economists surveyed appear to be more in line with the markets that aren’t pricing in as rapid of an increase.”

The difference between the economists and the Fed’s rate forecast comes despite very similar economic outlooks. The economists surveyed project U.S. gross domestic product will advance 2.9% during 2015 and project the unemployment rate to fall to 5.6% by the end of next year, from last month’s 6.1%. 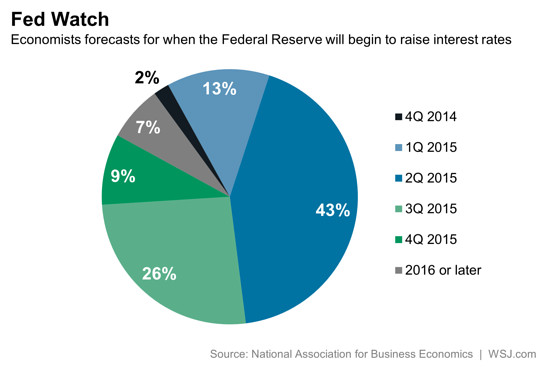 Following their policy meeting this month, Fed officials continued to say they plan to wait a “considerable time” before acting to raise rates.

The economists surveyed also pointed to a growing threat to the U.S. economy from the Ukraine–Russia conflict. Of those polled, 47% said the “fallout from the crisis” will hinder domestic growth. That’s up from 34% with that view in a June survey.

The reading could indicate that any businesses “exporting to Europe are likely to feel the effects,” Mr. Silvia said.

Almost all of the economists surveyed–98%–say the European recovery will be hindered by the conflict. That’s up from 84% in June.