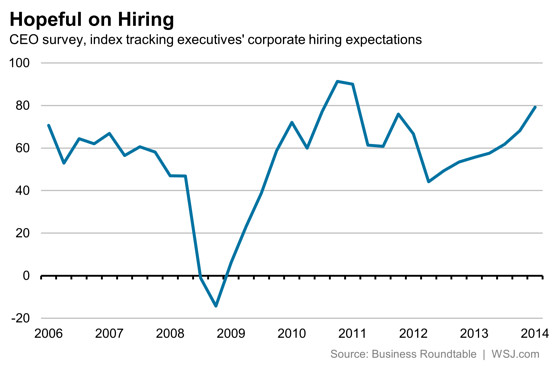 U.S. business leaders’ outlook on hiring and sales improved modestly during the second quarter but their expectations for capital spending in the second half of the year dimmed amid uncertainty over tax policy, according to a new Business Roundtable survey of top chief executives.

Some 57% of executives said they don’t expect to increase capital spending over the next six months, up from 51% during the first quarter. That outlook is “troubling because of the high corollary between investment and job growth,” said Randall Stephenson, chief executive of AT&T Inc. and chairman of the Business Roundtable.

The Washington trade group said the survey reflected dimmer views towards the U.S. business climate because lawmakers in Washington haven’t made any progress on a broad tax-policy overhaul or on a short-term package of so-called tax extenders, which includes about 50 different tax breaks for businesses that expired at the end of last year.

Businesses would be more likely to invest despite tax increases if Congress looked more likely to press ahead in the next year on a broader overhaul, said Mr. Stephenson. “Those tax benefits expired without any clear line of sight to tax reform,” he said.

Another reason for a cautious outlook: Higher energy prices amid geopolitical turmoil in both Ukraine and Iraq risks reducing discretionary spending among consumers that have to devote a higher share of their income towards gasoline and other energy costs. Oil prices rose last week to the highest levels since last September after Islamist militants’ surprising advance through northern Iraq.

“We’re all very cautious right now,” said Mr. Stephenson. There is “a lot of geopolitical noise … that’s giving everyone a lot of pause.”

While the survey didn’t poll executives directly on the issue, Mr. Stephenson said businesses would be “hard pressed” to ignore any potential for rising oil prices. “That obviously has a bearing on all of us as we forecast out what happens to disposable income” for U.S. consumers, he said.

Overall expectations for investment and growth remain well below the potential of the U.S. economy, the trade group said. An index tracking expectations for investment, sales and hiring increased from the first quarter to its highest level in two years, but executives said they expected U.S. gross domestic product to increase 2.3% this year, down from an estimate of 2.4% during the first quarter.

Some 43% of executives said they expected to increase hiring over the next six months, up from 37% during the prior quarter. An index tracking business leaders’ employment sentiment rose to a three-year high, but the index has rebounded in the past only to stumble as stronger growth failed to materialize.

“There’s some level of optimism in terms of hiring, but it’s rare I would suggest that you see hiring move up without investment moving up,” said Mr. Stephenson. The latest results included responses from 131 CEOs, or about two thirds of the trade group’s total membership.