Much has been made of the cash hoarded by U.S. corporations that is not being channeled into the economy. A column in Monday’s Wall Street Journal shows public corporations are tapping some of the money to buy back their stock.

According to the story, corporations used almost $600 billion in cash to buy back their own shares in 2013 and the uptrend continues into 2014. While that’s a positive trend for household wealth, it raises questions about companies’ commitment to move ahead with capital spending projects.

Consider that 2013′s buy-back sum equals almost a third of the nominal purchases on plant, equipment and intellectual property spent by the economy’s entire business sector. With money directed elsewhere, businesses increased their real fixed investment by only 2.7% last year.

The lackluster revival in capex spending is a significant reason why this recovery hasn’t shown more muscle. Business spending did not return to pre-recession levels until the end of 2013, while real consumer spending got back there at the end of 2010 and total gross domestic product hit a new high in mid-2011.

Economists surveyed by the National Association for Business Economics expect business investment on equipment and IP to grow just a shade faster than the 3.1% gain posted in 2013.

The second-quarter survey of chief executives released by the Business Roundtable shows a deceleration in capex spending plans. Only 44% think their company’s spending will pick up in the next six months, down from 48% saying that in the first quarter.

Meanwhile, only 24% of small-business owners plan capital outlays in the next 3 to 6 months, according to the National Federation of Independent Business. The reading has made no headway in over a year because small firms are in “maintenance mode,” the NFIB report said.

On the plus side, both the Roundtable and NFIB surveys show businesses big and small are more willing to add to payrolls than they are to expand capital stock. Consequently, job growth should stay above 200,000 a month for the rest of this year and into 2015. Much like the new wealth generated by the stock buy-backs, better hiring will translate into faster consumer spending.

The lack of capex investment, however, has longer-run implications beyond economic growth. Companies are not upgrading or expanding their facilities, and that is holding back productivity growth.

The NABE forecasters think output per hour worked is going to grow only 1.2% this year. While that’s better than the 0.5% gain eked out in 2013, it will continue a trend of weak efficiency gains. Productivity growth is averaging less than 1.3% so far in this recovery versus about 2.7% in the last expansion.

Over time, small productivity gains will hold back the improvement in living standards, lessen profits gains and cause wage growth is translate faster into inflation. 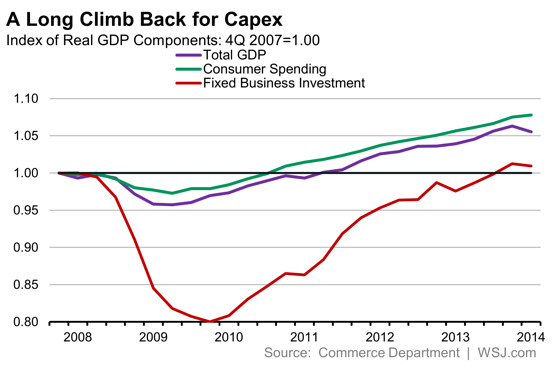