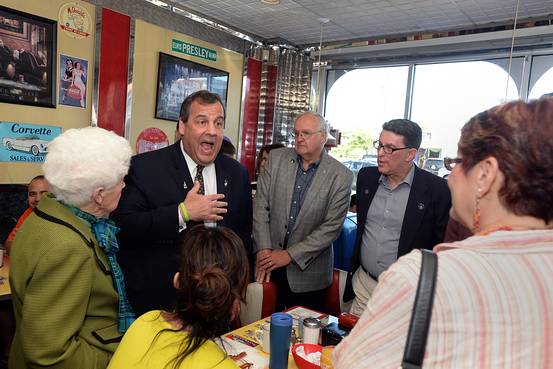 New Jersey governor and Republican presidential candidate Chris Christie greets people at Mary Ann’s Diner this summer in Derry, N.H. New Hampshire lost more jobs in August than any other state except for New York and Texas, according to the Labor Department.
DARREN MCCOLLESTER/GETTY IMAGES

Presidential campaign rhetoric about the sagging U.S. economy may seem a bit off in New Hampshire. The first-in-the-nation primary state has one of the lowest jobless rates in the nation, along with much higher median household income and a much lower poverty rate than the rest of the country.

But a new report from the Labor Department could give candidates a timely data point to seize on the campaign trail: New Hampshire lost more jobs in August than any other state except for New York and Texas.

The Labor Department’s report on regional and state employment and unemployment, released Friday, estimated the Granite State shed 3,900 jobs last month. The job losses were spread across a number of sectors, including education and health services; government; trade, transportation and utilities; and construction.

But don’t get too worked up: Officials in the state believe it may be just a quirk in the way the data is calculated.

The last time New Hampshire lost this many jobs was a year ago—in August—when payrolls dropped by 7,100. That was at the height of a labor dispute at Market Basket, the New England grocery chain whose workers went on strike after management ousted the store’s popular chief executive.

The impact was so widespread, the Labor Department even noted the disruption in its monthly employment report.

The long-running dispute ended in late August after the company agreed to sell a majority stake in the company to the former CEO. Employees across New England went back to work. In New Hampshire, payrolls spiked by 7,500 the next month.

It’s impossible to link job losses or gains to a single event or company, said Bruce DeMay, director of the New Hampshire Economic and Labor Market Information Bureau. But economists believe last year’s dispute and this year’s estimates are related.

That’s because officials use historical data to estimate the current figures, and recent history tends to have a bigger influence.

“Our take on it is that the Market Basket disruption last year kind of distorted the historical trend and is affecting the seasonal adjustment factors for this month,” Mr. DeMay said. “So it’s kind of a statistical anomaly. It’s not really an economic change.”

The numbers are volatile and are often revised. And the state’s unemployment rate is still 3.6%, compared with a national average of 5.1%.

Nevertheless, the numbers are easy fodder for candidates who want to appeal to Granite State voters frustrated with what they perceive as slow economic progress.

The Only State to Lose Jobs Since July Last Year: West Virginia