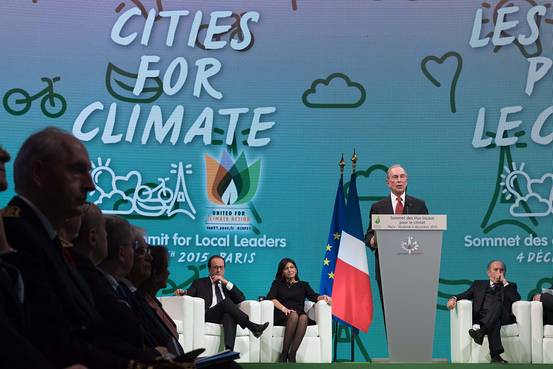 Harnessing local politics and tricks of the trade, city mayors from around the world are looking to step in where national leaders are falling short of their goal of reducing emissions of greenhouse gases.

Manchester, England, is installing heat pumps, while nearby Bristol is helping plant trees around the world. Salt Lake City is digging into the efficiency of its buildings and municipal fleet of cars and buses.

This week nearly 200 national governments sent officials to Paris to negotiate a global agreement that was originally meant to put the earth on a path to warm by less than 2 degrees Celsius above preindustrial levels.  Most officials concede that the commitments they brought to Paris will only trim the warming linked to carbon dioxide and other greenhouse gases to about 2.7 degrees Celsius.

But some mayors say they have the keys to further emissions reductions because of their unique power over local buildings, transportation and waste disposal and recycling. Overall, cities are responsible for 70% of energy-related emissions of carbon dioxide globally.

Flanked by Paris Mayor Anne Hidalgo and French Prime Minister Francois Hollande, Mr. Bloomberg on Friday kicked off a parallel conference in Paris to highlight the efforts of cities, as well as regional and other smaller governments.

While national politicians can face powerful resistance to greener policy from companies that extract and burn fossil fuels, many mayors have political support for making sacrifices for the environment, especially if the programs can help the city run cleanly or more efficiently.

“We don’t find in our city that kind of diversity and divisiveness that you find at the state and national level” on climate change and the environment, said Ralph Becker, the mayor of Salt Lake City. “We have set reducing our carbon emissions as a goal for every project we do.”

Will it make a difference? Some are trying. A group of 350 cities have combined forces to report on and reduce their emissions, in the same way their national governments are doing at the United Nations climate talks this week.

“Cities will and can close the emissions gap,” said Carl Pope, a climate adviser to Mr. Bloomberg.

The IMF Is Pushing for Carbon Taxes, But at What Price?