Stephen Poloz is a plain-spoken economist confronting the challenges of a central banking world turned upside down by the 2008 financial crisis. 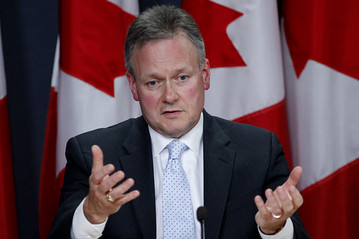 In a wide-ranging interview with The Wall Street Journal, the Bank of Canada governor acknowledges that a housing boom was a predictable offshoot of the central bank’s easy money policies launched in response to the last crisis. Still, he predicts a soft landing for housing and says he’s not too worried about financial bubbles. Bigger concerns right now include persistently low inflation, uncertainty that is preventing businesses from investing and Canada’s disappointing export performance.

Below are key excerpts of his interview:

On Canada’s housing boom: I start that from the point of view, what did you expect to happen?  We had a major cycle. We did our best to offset it with easy monetary policy; interest rates at rock bottom. When there’s a recession ongoing and exports are being clobbered, it’s not the businesses who are going to spend more because of low interest rates. It’s the households. The whole point is they’re going to use leverage to do it, so some of the elements of what people are concerned about were totally predictable except perhaps that we didn’t know just how long this cycle might be. This is exactly what monetary policy and the attempted stabilization of the economy and inflation looks like. Leverage goes up and what people spend on is primarily houses. Prices have gone up as one consequence of that extra demand. So we ask ourselves, ‘Then how do we come down off of that thing?’ There’s no question our economy right now is still running on basically policy fuel, policy induced growth. It’s unsustainable in that basic sense. This economy needs a higher percentage of external demand. We’ve been hoping for and actually have been forecasting a rotation for quite some time. Getting to a safer place is a matter of getting that export growth to rise, create new jobs and incomes so the debt-to-income ratio begins to slide down a little. That’s if everything goes well and that would be our expectation. We’re at a peak in the fragility and that will gradually improve. That’s what a soft landing looks like. Along the way the government did make some changes to help ensure that that peak didn’t get carried away. It certainly came at a time when there were concerns that there was a chance it could get carried away and so we have to give some credit for having sawn off part of that peak.

On the risk of financial bubbles: I’m not very worried about it in this moment. I’m worried about it conceptually. If we were really worried there are macroprudential tools available. I haven’t felt per se that monetary policy is being unduly constrained by the situation.

On inflation risks: This thing about inflation is the starting point is too low. It’s like you’re going across a lake and the wind blows you to the right, are you more worried about the next gust of wind going to the right or the left?  It’s not that hard right?  You’re going to steer to the left but if the wind came along and pushed you back to the left you’d go great, that saves me the effort.  It’s not a hard metaphor but for some reason when you first say inflation is kind of low so that means the downside risk to inflation is more important than the upside.  Are you saying that your forecast is unbalanced?  The risks are unbalanced?  No.  The risks are balanced, I’m saying that when inflation is one percent I care a lot more about a downside risk than I do about an upside risk because that would just push inflation closer to target.

On whether the Bank of Canada should be more aggressive to bring inflation back up to the 2% target sooner: If we did that then would we be seen as taking what people consider to be an unbalanced situation for households and making it more unbalanced, making it riskier, in exchange for getting home how much earlier, 6 months earlier? It’s a risk management problem. I just think that tradeoff is not a very positive one for a policy maker and so we say we think we’re at the right place.

On business uncertainty: Talk to people and they’re like, ‘You know, I got this many orders and I can satisfy that now and until I get say 50 percent more than that, I can just keep stretching the customers out, I don’t need to make an investment.’ You say, ‘Why don’t you make an investment now? That will improve your productivity. It will cut your costs. You’ll make more money.’ They say, ‘Well, the board is reluctant. The board saw how badly we got burned two years ago or three years ago and it’s a lot of money.’ You way, ‘Well, your balance sheet is really strong.’ And they respond, ‘Yes, the balance sheet is strong. Thank God, we got through it okay. But you know, we had to restructure. We’re like 40 percent smaller than we were back in 2006. Thank god we did that in time because otherwise we wouldn’t be here.’ You have that reluctance which comes from having been through a very bad experience. One burned, twice shy. I call those things uncertainties. Your fundamentals are right where they were in the old days, but you don’t go at it like you did then because you need to be a little surer than you had to be in the past.

On exports: When I came I couldn’t quite put my fingers on the export story so we had an export forecast that was quite solid looking and seemed to me a little more vigorous than anything I could reconcile with…So that just prompted more questions and a little more digging and of course now it’s been a year and sure enough that forecast recovery has not really materialized. There are pockets where there’s stuff going on which is helpful but basically the story hasn’t materialized and now we understand it better because we’ve scratched down and so there’s a case where your macro model really is telling you something completely different from what your anecdotal evidence suggested. Say total export is something like 500 billion dollars a year and the models kind of explain like 400 of it and then there’s another 50 or so which got some questions around it and then there’s 50 that’s missing or we just can’t figure out what’s wrong. We were able to put together a much stronger narrative around Canada’s export outlook which of course is absolutely critical to the macro outlook for us and when does inflation get to where it belongs so that was all fueled by a much more anecdotal evidence forcing the research into different areas instead of just a macro area supplemented by for me personally lots of dinners, lunches and breakfasts all across the country plus the visits.

On his meetings with business executives: I’ll take the first 5 or 10 minutes and describe to them what we think is going on and where our puzzles are or the things that we’re making assumptions about that we’re not sure of and I’ll say okay, here we are in Calgary and we got 12 people or 14 people around the table and you’re all in different businesses so I’d like you to think about that story and as we go around the table tell me where it doesn’t quite sit right with you and why and tell me along the way if there’s anything you can think of that would help me understand exports or inflation.  Why is inflation not yielding the way it used to? What happens then is it’s more focused. They understand how important the question is. They don’t think of it as just a theoretical question. What they realize is they fit into this, every company fits in there somehow and so actually everybody’s got something valuable to deliver. You get this kind of ping-pong thing that’s really valuable, like a brainstorming, and so you get a true conversation around something that really matters to the policy process.

On what policy makers missed before the financial crisis: Regulation was obviously kind of missing certain things that today we’d be more alert to. What the crisis did teach us is that we were missing certain linkages that matter a lot, they weren’t really part of the standard macro package and there were questions about how things were happening that we weren’t really asking. Out of that has been a pretty rapid evolution of what we do in that space. You used to be able to write down a macro model of the economy and the only financial variable in there was an interest rate, and if it was an open economy model it would have an exchange rate in it. That’s it. There were no stock prices. There wasn’t even a yield curve, or long rates. Just one rate. It was very simple and most of us still think with models like that. We’ve got better models now. The literature is full of more of that real financial linkage insight and a lot of that wasn’t really on board in the regulatory discussions and the more casual anecdotal type discussions. Some countries got luckier than others in that respect.

On Canada’s luck in avoiding a crisis in 2008: I don’t like to brag about Canada being smarter. I think we were a bit lucky. But I also think our regulatory framework was different in a positive way. There’s also a more conservative risk culture in our large banks, which I think helped us quite a lot. There’s a tradition there of keeping your customers and assets on your book and thinking of that as your bread and butter and maintaining the quality of that. But it’s not all by design so therefore it’s a little bit lucky.

On metaphors and economics: We needed a metaphor pretty badly for the financial stability report. We were going to talk about vulnerabilities as opposed to just risks. I said, ‘People are going to want to know, ’Why are you suddenly talking vulnerabilities instead of risk?’ So the one we came up with was you got a big tree in your back yard and it’s got a crack in it so you know it’s vulnerable. You wake up every morning thinking the tree is still there, that’s great.  Maybe it grows out of it; it gets stronger through time. Maybe it’s okay but it’s still a vulnerability. The risk of course is that a storm come along that’s bad enough that it knocks it down. It could be that the thing falls on your neighbor’s house, and then you knew the crack was there. People know that I like a good metaphor. The tree thing, it hit a couple people like a charm. They’re like – oh, okay, vulnerabilities.