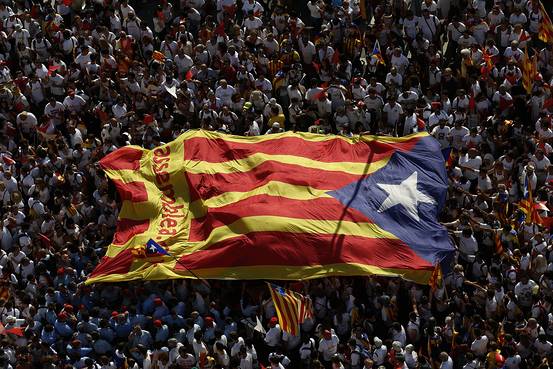 MADRID—Two days before a regional election that may put Catalonia on the path to independence, Catalan banks have become the focus of a heated debate in Spain.

The issue is the future of Catalan lenders in the case of a creation of a new Catalan state, which would likely be left outside the eurozone. The question is significant, as Catalan banks are large by eurozone standards, and the wealthy region can’t afford any significant disruption in their operations.

The situation is unprecedented: Since the eurozone was created in 1999, no part of the monetary union has seceded. Catalonia’s government wants to secede from Spain, but not the European Union or the eurozone. Madrid has responded that independence is not possible and, if it happened, it would leave Catalonia stranded out of both.

Recent EU pronouncements indicate that Catalonia would be left out of the union in a scenario of non-amicable separation. The European Commission has often said that new countries would have to apply for membership.

This puts the spotlight on the European Central Bank. Luis María Linde, ECB board member and head of the Bank of Spain, told Spanish lawmakers Wednesday that the big Spanish banks headquartered in Catalonia—CaixaBank and Banco Sabadell—would be cut off from ECB funding if the region were to break from Spain.

This has triggered alarms across financial markets, with Catalan banking stocks falling. Analysts at Deutsche Bank say a political compromise between Barcelona and Madrid is still possible, but would not be easy. In the worst case scenario, they note, the standoff could evolve into a classic “prisoner’s dilemma” outcome, in which both sides lose: Catalonia ends up with capital controls and Spain loses a big chunk of its economy.

Still, it’s not at all clear that even in that scenario Catalan banks would be left out in the cold.

Pro-independence Catalan politicians point out that the ECB has credit agreements with banks from small non-eurozone countries including the likes of Kosovo—which is not recognized by Spain—and Vatican City. But these are unusual cases; more relevant is the case of large lenders from non-eurozone countries, for example the U.K., the U.S. and Switzerland, all of which have complete access to ECB credit.

In fact, the ECB increased this access in recent years to offset the pressures on lenders caused by the persistent eurozone crisis. Liquidity for non-eurozone banks is abundant and easy to obtain.