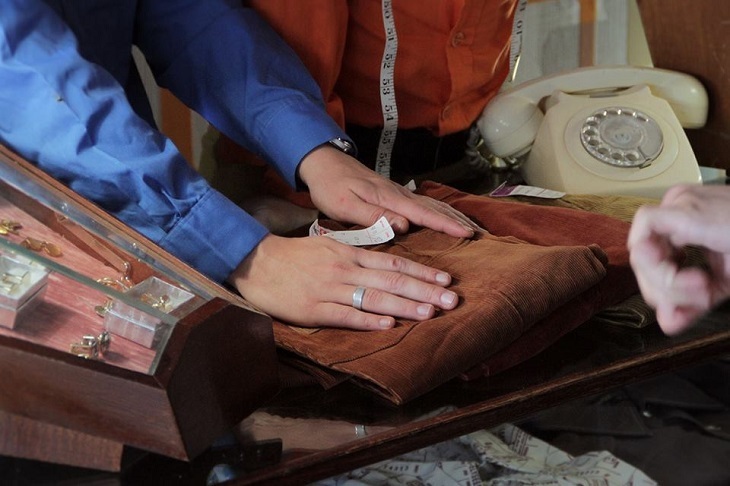 “Sir John would have creamed his corduroy jeans at this close-up,” asserts Trouser Bar producer David McGillivray.
McGillivray with actor Nigel Havers.
The undressed set of Trouser Bar – a TV repair shop in Caledonian Road near King’s Cross.
The finished set – ready for action.
Brian Robinson who features in the film and who also helped reignite interest in the work of Peter de Rome, the director for whom Gielgud originally wrote his script.
With the film seemingly blocked, McGillivray is now working on a documentary called Inside Leg: The Making of Trouser Bar.
Actor Hans Berlin with cameraman Bouncer Munro.
“The climactic final scene of Trouser Bar. Yes, it’s an orgy but it’s all done in the best possible taste,” – according to the film’s producer.

A row between the filmmakers and the Sir John Gielgud Charitable Trust means the film, which recently finished shooting near King’s Cross, will probably now have to “stay on the shelf”.

The script for Trouser Bar was written in 1976 by the openly gay Gielgud for his friend Peter de Rome, but never made during his lifetime. Its saucy story involves customers in an old fashioned men’s boutique trying on the wares then having a bit of sly rumpo with the shop assistants. Meanwhile passersby peer through the windows — with these parts being played in the new film by the unlikely triumvirate of Julian Clary, Nigel Havers and Barry Cryer.

McGillivray explains that he originally approached de Rome to direct the film in 2012 as a tribute to Gielgud, but with de Rome in retirement then decided to produce it himself. He contacted the Trust but was surprised when its representative Ian Bradshaw said the estate did not approve, later labelling the project as “inappropriate”. Production on the film continued nonetheless with a TV repair shop in Caledonian Road serving as the primary location for the Trouser Bar of the title.

Though the film is now nearly finished with just some final editing left, the Trust, which owns copyright, has threatened to take legal action should McGillivray ever try to release the film. “We don’t really know where to go from here,” says the producer, adding of the Trust: “They’re trying to preserve an image of Sir John Gielgud that never existed. He was very out to his friends and loved discussing the attractive men he’d seen around the world in tight trousers. As someone else recently said on our Facebook page: he wrote it so how can it be inappropriate?”

McGillivray confesses: “There’s not a great deal of plot in Trouser Bar and I would never try to claim it was a masterpiece”. But he is happy with the nearly finished product: “I think of it as an art movie — it won’t be shown anywhere but film festivals and art galleries” and he adds “I think if they [The Trust] were to see it, they’d see it’s quite beautiful and a fitting tribute to Sir John”.

McGillivray is currently working on a documentary called Inside Leg: The Making of Trouser Bar about the controversy surrounding the project.