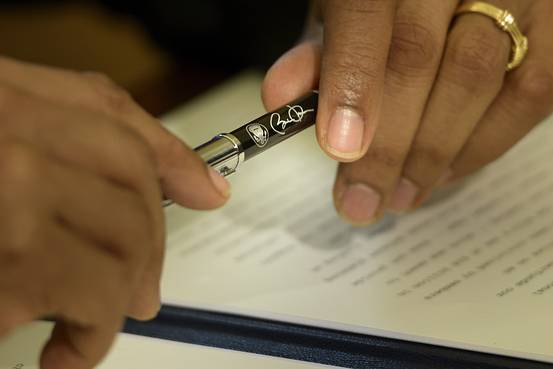 The same day President Barack Obama vetoed the National Defense Authorization Act, he reauthorized an obscure Census report that lapsed after weeks of delay in the House.
BRENDAN SMIALOWSKI/AFP/GETTY IMAGES

The Census Bureau resumed work today on a survey that feeds into the nation’s reports on gross domestic product, corporate profits and the flow of funds, after congressional delay imperiled a quarter’s worth of data.

The obscure survey, known as the Quarterly Financial Report, receives little attention as it’s not a major report in its own right, even though it’s used to build some of the most prominent U.S. economic reports. During the congressional upheaval of the past month, the authorization lapsed, despite no opposition in Congress to the report. Work on the survey was halted on Oct. 1. After several weeks of delay and scheduling problems, the House sent the measure to the president yesterday.

Had the report not been reauthorized this week, the Census Bureau may have had to cancel the survey entirely, losing a quarter’s worth of data. Even with a pause of more than three weeks, the quality of the surveys will likely be at least somewhat damaged. The census said in an e-mailed statement only that “impacts on the data are being assessed.”

The inability to conduct surveys delayed and damaged the quality of a range of economic reports in October of 2013, when the government shut down for a little over two weeks. Surveys are only as valuable as the responses they receive. In 2013 the Census Bureau’s biggest survey, the American Community Survey, for example, saw the rate of nonresponse triple from around 3% in 2012 to above 10% in 2013—the worst ever for the survey—due to the government shutdown. The nonresponse rate returned to 3% in 2014.

How Congressional Chaos Could Make It Harder to Measure Economic Growth

What’s an Economist to Do Without Government Data?