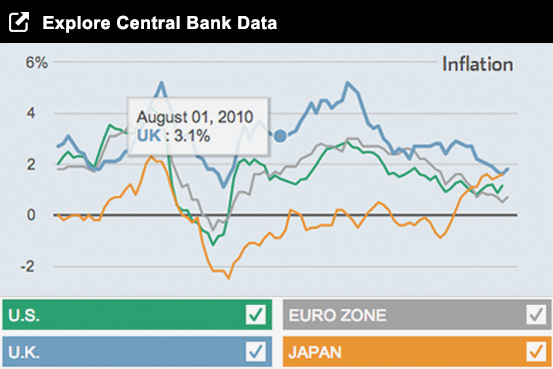 The Wall Street Journal’s Central Bank Watch, an interactive graphic, lays it all out in color: http://projects.wsj.com/CentralBanks.

The chart shows how four major central banks — the U.S. Federal Reserve, the European Central Bank, the Bank of England and Bank of Japan — have used two key policy tools, interest rate targets and asset purchases. Also see how their economies compare on unemployment and inflation.

The interactive graphic shows how the measures have changed over more than five years. To see gauges for all four central banks at once, click on the white boxes next to each country name in the color bars at the top. To see fewer, unclick on the one you want to erase.

Check back often. It automatically updates at http://projects.wsj.com/CentralBanks.