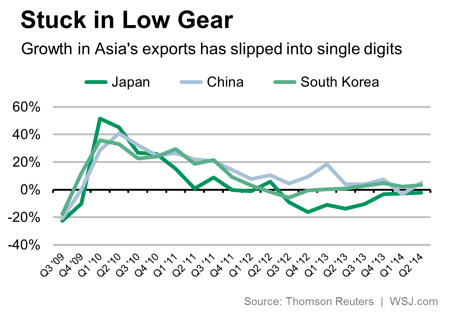 Asia’s exports to the U.S. and Europe are finally picking up. But the region’s increasing dependence on China, where growth is moderating, is muting any recovery in exports.

While combined exports from seven of the region’s top export economies — China, Japan, South Korea, Hong Kong, Singapore, Taiwan and Thailand – grew 12% to Europe in the second quarter on year and 6% to the U.S., their overall exports rose just 3.2%.

South Korea’s exports to the U.S. rose 13% in the second quarter and climbed 17% to Europe, but fell 3% to China, the country’s largest export market. Korea’s overall exports climbed just 3%.

The divergence underscores how, in the past two decades, China has not only taken over as the world’s factory for finished products to the West, but emerged as a major customer in its own right.

As China took over the manufacture of finished products following its entry into the World Trade Organization in 2001, Asia’s smaller exporters gradually slipped into China’s supply chain, feeding it commodities, components and machinery.

Asia thus remained vulnerable to rising and falling demand in the West, since most of its exports to China were only passing through. The hope was that China’s growing economy would gradually absorb more Asian exports and help the region’s economies “decouple” from the West.

Now that appears to be happening. China is consuming more of what it imports at home.

“Roughly half of what you see of Asia’s exports to China stays in China. The share has been going up,” said Rob Subbaraman, an economist at Nomura in Singapore.

China is now grappling with the after-effects of a long, credit-fueled investment boom. Despite government efforts to revive growth with a “mini-stimulus” program, growth in industrial production, property prices and in credit continue to slow. That means demand at home is weak, and with it imports of goods for domestic consumption.

While China’s exports rose 5% in the second quarter, its imports from Asia rose just 1.1%, after shrinking 4.3% on year in the first quarter. Economists say this is a sign of weak local demand.

The divergence may turn out to be temporary. The recovery in the West could fizzle as growth there remains sluggish and Europe fights off low inflation. Alternatively, recovering Western demand could help revive China’s own demand, which in the past has proved strongly dependent on the health of its exports. 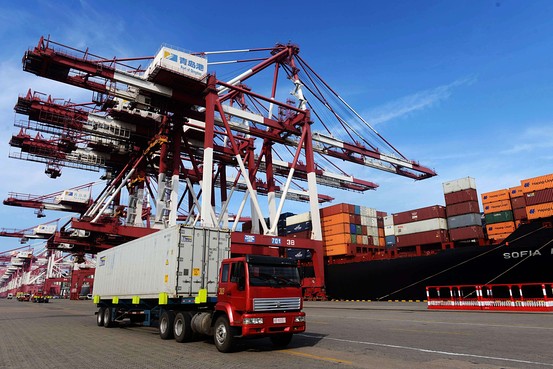 In the past two decades, China has not only taken over as the world’s factory for finished products to the West, but emerged as a major customer in its own right. A truck carries containers at a cargo port in Qingdao, east China’s Shandong Province.
Zuma Press