China Is “One of the Most Unequal Countries in the World,” IMF Paper Says – Real Time Economics 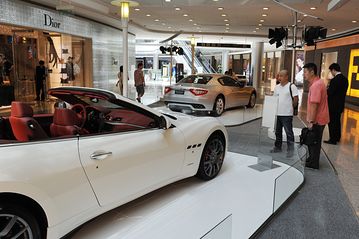 Men look at a Maserati sports car on display at a luxury mall in Shanghai.
Agence France-Presse/Getty Images

A widening gap between China’s rich and poor makes it “one of the most unequal countries in the world,” according to a new working paper published by the International Monetary Fund.

Authors Serhan Cevik and Carolina Correa-Caro write that the rich are gleaning most of the fruits of the transition from a system of centrally-planned socialism to a market-oriented economy.

Although per-capita income has grown and the number of people living on less than a $1.25 a day has plummeted, income inequality has skyrocketed, the economists said. The top quintile of earners now pull in nearly half of total income while the poorest quintile of earners account for under 5%.

“China’s widening income inequality is largely a reflection of faster income growth among the rich, rather than stagnant living standards among the poor,” the two economists said.

With an estimated 2.4 million millionaire households, China now has more than any country but the U.S.

China’s credit-fueled investment and export-led development model are likely the primary drivers of the sharp increase in income inequality over the last three decades, they said.

Beijing’s economic strategy has aimed at higher growth rates. Although that effort may have lifted many Chinese out of poverty, the two economists said there’s mounting evidence that the widening income gap could weigh on future growth. That, they said, could come “with significant social consequences, especially in a country like China aiming to move beyond the ‘middle income’ status.”

To relieve those potential pressures, the two economists recommend ramping up taxes to pay for a redistribution of income: raising taxes on higher earners, broadening the personal tax and imposing a value-added tax on services. At the same time, Beijing could lower labor taxes that hit low- and middle-income earners, they said.