China May Not Be History’s Economic Growth Champ After All, Report Says – Real Time Economics 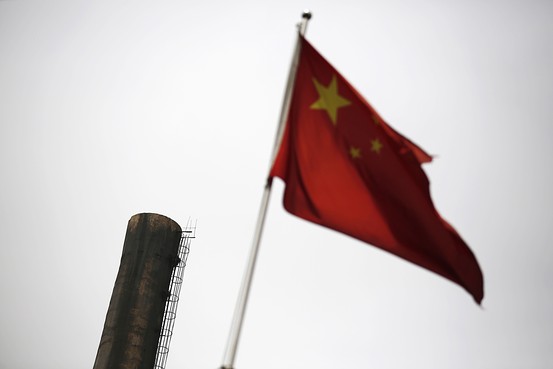 A Chinese national flag is seen in front of a chimney of a heat supply plant in Beijing.
Reuters

Nearly every story about China’s extraordinary growth over the past 30 years asserts two things as a given: a). China has grown about 10% a year for 30 years and b). China’s long-term growth record in unsurpassed in modern history.

A new report by the Conference Board says both of those assertions may be untrue.

According to the report, written by economist Harry X. Wu, a senior advisor to the New York-based business research group, China’s economy grew at 7.2% a year between 1978 and 2012 — a rate far lower than what Beijing claims and nowhere near 10%. And looking at a number of Asian economies over a roughly two-decade period during which such countries quadrupled their per-capita GDP, Mr. Wu concludes that China isn’t the growth champ. Japan is, followed by Taiwan.

This isn’t just a question of bragging rights, writes Mr. Wu. Businesses base their investment plans on GDP growth, so accuracy is important, especially during down times. “When the economy is, in reality, slowing down or struggling, then the impacts of inaccuracy are farther reaching, potentially undermining efficacy in business, policy and household planning both inside and outside of China,” he writes.

Trying to poke holes in China’s GDP record is a pastime for a number of economists. As evidence, many point to Chinese Premier Li Keqiang’s statement in 2007 that GDP is a “man-made and therefore unreliable” statistic, as he told the U.S. ambassador at the time.

Mr. Li, who was then Communist Party chief of Liaoning province, said he looked at stats on electricity, rail cargo and loans to get a better gauge of economic activity, according to a copy of the ambassador’s memo, which was made public by WikiLeaks.

Like a number of economists, Mr. Wu argues that China overstates productivity growth and underestimates inflation, which tends to make inflation-adjusted GDP numbers –- the ones that get highlighted every quarter — higher than they otherwise would be. He also suggests that politics plays a big role, particularly the desire of local officials to exceed GDP targets, which have long been an important way to boost official promotion chances in China. (Now, those incentives may be changing: China’s leaders say that in addition to GDP growth, local officials will be judged on other measures as well, including environmental clean-up efforts.)

What sets apart the Conference Board report is the length of time that Mr. Wu examines, which spans a number of rough economic patches for China. A great deal of the difference between the Conference Board data and official data reflects the years when China hit rough spots. In 2008, the year the U.S. financial crisis spread globally, Mr. Wu calculates that China’s economy grew 4.7% compared to China’s reported 9.6%. In 2012, when Europe was battered by recession, he estimates China’s GDP increased just 3.7%, compared to China’s reported 7.7%. The Chinese overestimates, he says, greatly affected the 30-year growth numbers.

Mr. Wu argues that China’s numbers especially diverged from reality after the country joined the World Trade Organization in 2001. That was a period, he says, in which “significant overcapacity was built in state-dominated and influence industries,” and localities competed fiercely to be top GDP dog and attract investment.

By contrast, Mr. Wu’s analysis of the 1952-1978 period—the heyday of state planning—doesn’t differ that much from the official GDP numbers. 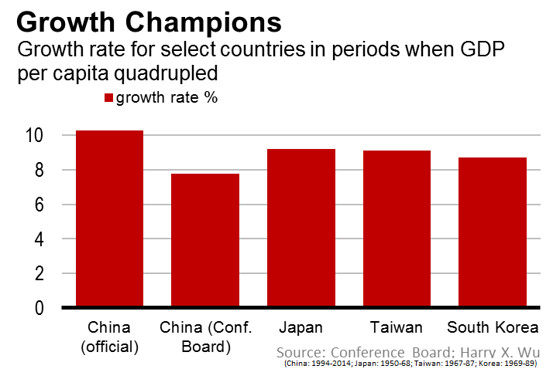 Mr. Wu’s report is sometimes short on details—for example, he recalculates China’s “official” GDP numbers without clearly explaining why. One of his charts is incorrectly labeled, and there are some conflicting numbers he presents, though none that undercut his ultimate argument. “Sorry,” he writes in an email. But his report is bound to deepen the debate over whether China’s accomplishments are as astonishing as claimed.

Even by his numbers, China’s growth was impressive –- 7.2% a year for more than 30 years is a huge accomplishment. But it isn’t out of the ordinary for an Asian powerhouse and is even somewhat less rapid than the growth of Japan, South Korea and Taiwan.