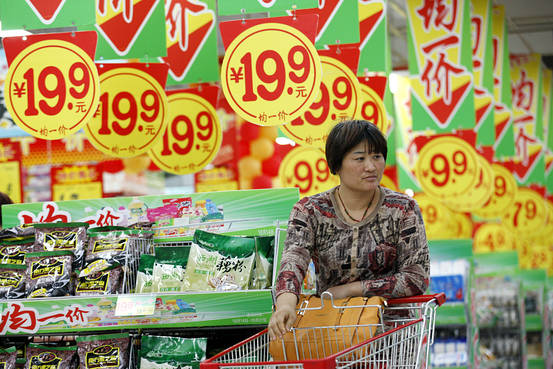 A supermarket shopper in Huaibei, Anhui Province, in China. The IMF’s top Asia economist argues a booming services sector, including retail, is offsetting the collapse in manufacturing.
CHINAFOTOPRESS/GETTY IMAGES

Recent Chinese economic data is stoking fear the world’s second largest economy is decelerating at pace that could pull the global economy into a recession.

But the International Monetary Fund’s top Asia economist, Changyong Rhee, says such pessimism may be unwarranted. A booming services sector—such as shipping and retail—is offsetting the collapse in manufacturing, he argues.

“We don’t think there’s enough evidence based on the manufacturing sector that there will be a hard landing,” Mr. Rhee said in an interview. “They definitely have a manufacturing slowdown, an overcapacity problem. But other parts of China are actually growing faster.”

If Beijing relies too much on monetary policy to stimulate growth, it could fuel China’s economic problems rather than fix them, the IMF official cautioned. His warning came as the People’s Bank of China on Friday cut interest rates again in a bid to revive growth.

Old ways of measuring China’s economy—such as looking at electricity consumption—are outdated because they don’t accurately reflect the changing nature of growth, Mr. Rhee said. Services now account for more than 50% of the country’s economy and there is a good chance their contributions are being underestimated, he said.

On first glance, China’s trade data appears to support worries about the economy. But digging a little deeper into the numbers may actually show the country’s move towards a growth model more reliant on consumer demand is already bearing fruit.

Although the value of imports has fallen, volumes tell a different story. By adjusting for the fall in commodity prices and the appreciation in the yuan, the IMF calculates imports actually grew in July by 2%. And while the amount of goods imported has declined, imports of services are in double digits.

That is not to say the IMF believes there is no cause for apprehension.

“If they mismanage the financial market, then they could have a hard landing,” Mr. Rhee said.

Beijing is facing a daunting task. Winding down the amount of credit in the system too quickly could stall growth. But failure to cut corporate debt levels and deal with bad loans quickly could create a bigger credit crisis over the next couple of years.

“One question is whether China can manage this transition with the current governance system,” the senior IMF official said. “That is a critical issue.”

Beijing will need to ensure government agencies take greater responsibility for their respective areas of oversight and state-owned companies will need to have stronger budget constraints, he said. China’s recent market turmoil revealed a weak regulatory structure. And overhauling a political system that relied on state-owned firms to boost growth and enrich regions is also expected to be a challenge.

That’s why, even though the IMF is backing more stimulus by Beijing to prevent too much deceleration in the economy, fund officials are concerned the government may depend too much on the old system of juicing the economy through credit. Counting on monetary policy, rather than using the budget to stimulate the economy, could exacerbate the problem of overcapacity.

“If they rely on monetary policy too much, then they would continue the classic credit expansion,” Mr. Rhee said. Besides fueling bad investments by state-owned enterprises, it could also “drag on necessary structural and governance reforms.”

The IMF wants Beijing to instead to use tax cuts or more state benefits for the poor to drive more consumption.

With a modest amount of stimulus, Mr. Rhee said the IMF is confident the economy will slow to around 6.5% in the second half of this year, putting the growth rate on target to hit its 6.8% forecast for the year.

Still, even if China’s growth doesn’t fall off a cliff and slows to an IMF-expected rate of 6.3% next year, the effects on the global economy are much larger than the fund originally predicted.

“The spillovers that we are now seeing are much larger than we anticipated…about double what we thought it was” Mr. Rhee said. That means that for every one percentage-point cut in China’s growth, it saps around 0.8 percentage point of growth from many Asian economies, he said.

That, along with uncertainty over the ability of Beijing to manage a major overhaul of the world’s second-largest economy, gives investors reason to be concerned about the fate of global growth. And especially in a world of souring prospects, investors should be prepared for a long, bumpy ride in global markets.

China Growth in Focus as Exports and Imports Fall

China Economic Growth Falls Below 7% for First Time Since 2009