A sputtering housing market threatens China’s economic outlook and would probably force the central bank and local governments to intervene if they want to hit the country’s 7.5% economic growth target for this year, according to research from the Federal Reserve Bank of Kansas City.

The latest figures “indicate the expansion of the real-estate sector has slowed significantly,” write economist Jun Nie and research associate Guangye Cao. “Taking both the short- and long-term factors into account, the real estate sector’s recent slowdown is likely to continue as housing activity stabilizes at a lower growth path.”

The authors say housing and construction have played an overwhelming role in China’s supercharged growth rates, which have elevated it to the second-largest economy in the world. Real-estate investment grew at an average annual rate of 20.2% since the country’s 1998 housing reform, about twice the rate of gross domestic product expansion, Messrs. Nie and Cao write.

“The slowdown in China’s real-estate sector poses a risk to the country’s near-term GDP growth. To achieve the 7.5% growth target for 2014, additional policy stimulus from both the central and local governments will likely be needed,” they say.

The latest figures out of China indicate recent stimulus attempts have yet to relieve distress in lending and real estate markets. Growth in new lending declined sharply in July after a strong June increase. Housing sales fell by more than 10% in the first seven months of the year. The drop came despite an easing of property sale restrictions. 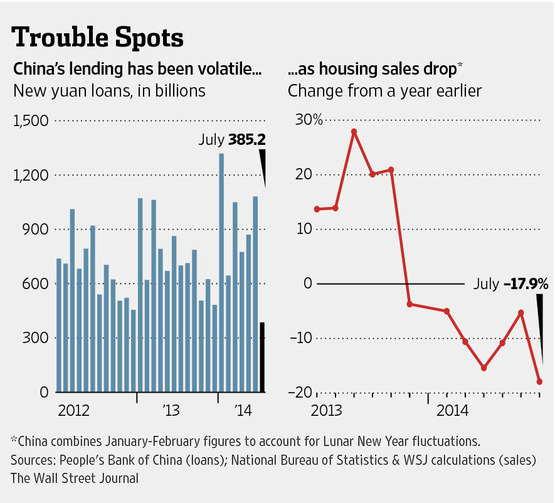 The growth in bank loans and total credit coursing through the economy hit their lowest single-month levels in over four years, People’s Bank of China data showed.