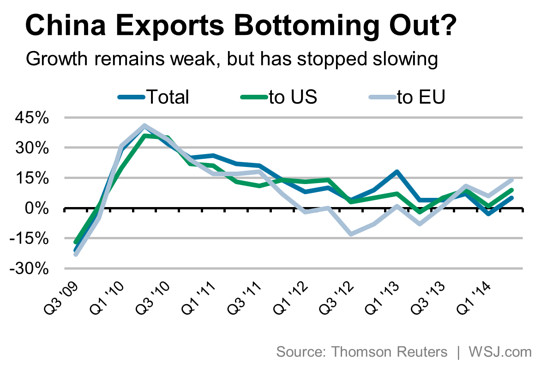 China’s latest trade data disappointed many economists, but it may offer hope that a long-running slowdown in Asian export growth has bottomed out.

China’s General Administration of Customs said Thursday that exports in June grew 7.2% compared with the same month of 2013, below a median forecast of 10% growth from a Wall Street Journal poll of 21 economists.

That rounded out yet another quarter of weak, single-digit export growth. After years of growing by more than 10% a year, exports grew 5% in the quarter compared to the year before. That’s the fifth straight quarter of single-digit expansion.

But the uptick in exports represents a rebound from the first quarter’s 3% contraction. That suggests that, while the export cycle may not be recovering to its post-crisis pace, it is at least perhaps no longer slowing down.

Two of Asia’s electronics exporting powerhouses, South Korea and Taiwan, have reported a similar trend. South Korea’s exports grew 3% in the second quarter, up from 2% in the first three months of the year. Taiwan’s also expanded 3%, up from just 1% in the first quarter. 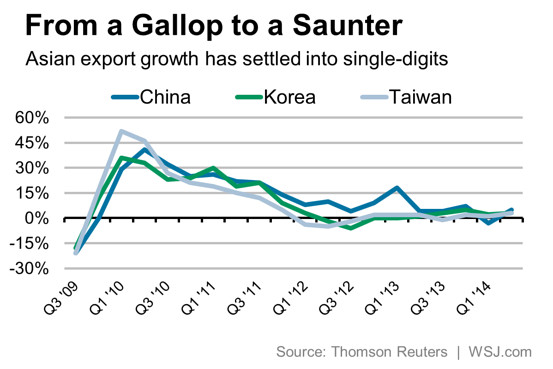 Despite the rebound, the export engine that once drove China and the rest of Asia’s economies appears stuck in low gear amid weak global growth and shifts in the global manufacturing supply chain.

To break this trend,  economists say, China will need to provide even further fiscal stimulus to make up for the weak contribution that trade is making to growth.

“The uncertainty in global demand in the near-term increases the pressure on the domestic front for China,” J.P. Morgan economist Haibin Zhu wrote in a note to clients. “We expect the government will continue to roll out pro-growth measures, including fine-tuning in monetary and credit policies.”

China has already stepped in with a variety of measures to revive the pace of growth. In May, it targeted trade, with the State Council saying it would speed up export-tax rebates and expand credits to importers and exporters.

No matter what China does, the growth rate of its exports is most dependent on the health of its trading partners. Those numbers are encouraging. Exports to the United States grew 9% in the second quarter, while exports to the ailing economy of the European Union bounced back by 14%.

Combined with weaker import growth of just 5% as the economy slows, China’s trade surplus is widening. That helps explain why Citigroup forecast that China’s reserves are likely to have climbed in the second quarter to nearly $4 trillion.