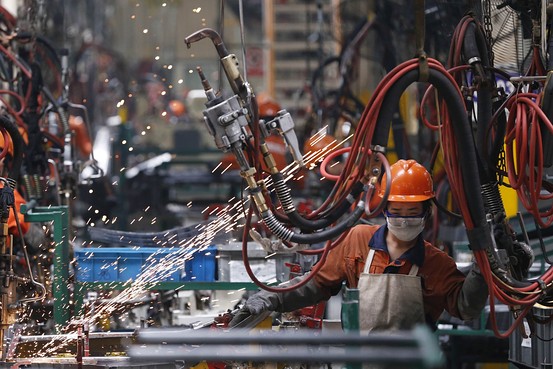 An employee works at a production line inside a Geely factory in Ningbo, Zhejiang province.
Reuters

China’s productivity is slipping away, the miracle days are largely over and the best way for Beijing to slow its slide into “the middle-income trap” is through meaningful structural reform, two reports argue, a process that has so far remained largely in the slow lane.

China’s economy, once described as miraculous, is now struggling with rapid wage increases and a declining number of new workers, so productivity gains increasingly must come from structural reform, automation, greater company efficiency and innovation, the reports say.

“China is now at this critical juncture, and maybe has been for several years,” writes Harry X. Wu, a senior advisor to The Conference Board’s China Center and an economics professor at Japan’s Hitotsubashi University. “This explains the ongoing ‘soft fall’ slowdown in economic growth despite the government’s continued stimulus exercises and continuing high-levels of investment and supporting credit expansion.”

Mr. Wu argues in a Conference Board paper that China’s economic ascent may have been less miraculous than it appeared, with total factor productivity – a measure of an economy’s technological dynamism – badly lagging other Asian high-growth economies at a similar stage in their development.

“Our study shows that China’s spectacular growth in the reform period has been mainly investment-driven and quite inefficient,” Mr. Wu wrote.

A big problem, which often complicates efforts to assess the health of China’s economy, is the reliability of Chinese data. Using three measures of productivity, J.P. Morgan economist Haibin Zhu concludes in a research note that China’s total factor productivity grew 1.1% in 2013 from a 3.2% expansion in 2008. Mr. Wu draws on different methodology to argue that total factor productivity turned negative from 2007 to 2012.

Echoing Mr. Wu’s view that investment rather than labor has in recent years driven China’s productivity – and not that well – Mr. Zhu said that China has made some of the right noises about much-needed structural reform, but finds implementation challenging.

“Restoring productivity is critical,” for China if it wants to work down overcapacity while maintaining a relatively high growth rate, Mr. Zhu wrote. But when it comes to structural reform, “the current government has limited experience and is facing resistance from vested interest groups,” he added.

Mr. Wu argues that China has a highly checkered history on productivity growth from 1957 until now – he describes the early 1957-1965 central planning days as a productivity “graveyard” – with the only major bright spot occurring between China’s entry into the World Trade Organization in 2001 and the global financial crisis in 2007. This period played to China’s competitive strength in labor-intensive industries as global markets expanded, he said.

By 2006, however, China’s economy was already starting to overheat, fueled by Olympics-related over-investment, Mr. Wu argues, compounded by the massive stimulus program starting in 2008 that fueled inefficient investment and bad loans.

Many countries that once seemed like miracle economies have not managed to increase their productivity, undergo fundamental restructuring and otherwise emerge from the so-called middle-income trap, including Argentina and Chile, Mr. Wu said in an interview.

“The over-building, the over-capacity and the ‘advance’ of the less efficient State into private sector markets are now substantially dragging on China’s growth,” Mr. Wu wrote. “In short, the findings illuminate that China’s principle economic problem today is one of productivity.”